While I’ve been taking suggestions on revamping my blog, some advised cleaning up the sidebar and deleting older interviews to make it easier on the eyes. After much thought, I really can’t just weed out certain interviews because each has a life of its own. Maybe its the frank musician that discussed exactly what’s wrong with the label executives, or the bass player that told me just how “gross” groupies are, regardless, each artist I’ve talked to needs to be showcased. So, when you’re bored at work or just surfing the Web, you have plenty of reading material on your hands.

While going through each interview I came up with my “Top 10” list of interviews that have surprised me or left an impact. Here’s my Top 10 list, in no particular order. 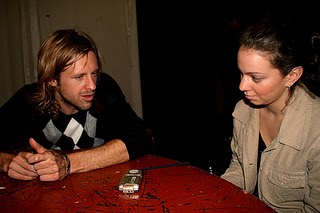 1. Jon Foreman of Switchfoot (photo above)
I’ve been listening to Switchfoot since high school. I’d buy tickets with friends and we’d travel to NYC together at least once a year to see them live. One year, when covering the show for MTV’s concert blog, I was able to meet the guys, and interview frontman Jon Foreman. To meet one of your favorite musicians and talk to him about life, his fears of being a songwriter and pretty much anything else you’d want to know was truly one of the best moments in my music writing career. Read the in-depth interview here.

2. Colbie Caillat
I remember my cousin from California mentioning Colbie Caillat on his visit to New Jersey right after her debut album was released. A few weeks later “Bubbly” exploded on the radio and I just had to buy myself a copy of her album. The next summer she was going on tour with one of her biggest influences (and mine) — John Mayer. I was able to set up an interview for the blog and was surprised at how humble and down to earth she was. Talking about her stage fright before performing and thoughts on just why “Bubbly” took off, Colbie shared insight into her life before and after her music invaded the airwaves. Read all about it here.

3. Marko DeSantis of Sugarcult
This was my first impromptu band interview. Before catching Sugarcult’s set at Starland Ballroom, I noticed a group of fans by the stage door talking to someone. My friend found out it was Sugarcult guitarist Marko, so I asked to interview him. Why not? He wrote down his email address in my notebook with the casual, “Just don’t show this around” and I emailed him questions a few days later. My first nationally published interview, it was featured on Jane Magazine‘s Web site. I still can’t believe I did that, but it paid off. Read the full email interview here. 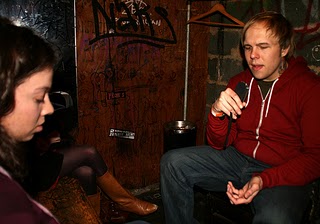 4. Kris Roe of The Ataris (photo above)
I lucked out being able to interview Kris twice — first for Rutgers University’s entertainment section, Inside Beat, and last year for my blog. Having listened to The Ataris growing up, I attended a performance of theirs at Rutgers and was able to obtain an interview after talking to his manager. After interviewing him with my friend Monica, I remember leaving the room with the realization and determination that, “This IS what I’m going to do the rest of my life.” Haven’t looked back since. Read the full two-part interview with Kris from his performance at Maxwell’s last year here.

5. Joshua Radin
Incredibly honest about the music industry, Radin bought himself out of his five record deal with Columbia and put out his most recent release independently. Not to mention, it hit No.1 on the iTunes folk charts. Not too shabby. A class act to follow, Radin even performed at Ellen DeGeneres’ wedding. Read on for more of his take on the music business here.

6. Stephan Jenkins of Third Eye Blind
I was extremely nervous for this interview. 3eb was one of the most recognized bands of the 90s and having read up on past interviews with the band I was a little worried how mine would pan out. Luckily, it went extremely well — good enough to be used as my first interview feature on MarieClaire.com! You can read it on Marie Claire here. 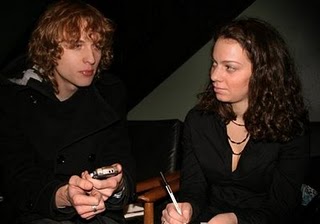 7. Vince Scheuerman of Army of Me (photo above)
Possibly the most open singer-songwriter I’ve interviewed, my chat with Vince revealed many of the stories behind his songs, the struggle of making it in the music business and a typical day in the life of a musician. Read on for more here.

8. Tyson Ritter of the All-American Rejects
Oh, Tyson. Brutally honest and never afraid to hold anything back. Though it was a quick 3-question on-the-spot interview outside his tour bus at a concert, it’s one that will always stand out in my memory. Laugh about it here.

9. Jeph Howard of The Used
Okay, I must admit interviewing Jeph on their tour bus was definitely a highlight of the interview. Possibly the longest interview I’ve had, he chatted with me for nearly an hour about life on the road, groupies, and struggles the band has faced. Read all about it here.

10. Sia
Australian singer-songwriter Sia was definitely the most captivating and lively phone interview I have ever had. With her infectious laugh and refreshing take on the music industry, it’s interviews like these that make me continue pursuing this crazy career. You can read the interview featured on RollingStone.com here.

That’s my Top 10. What’s your favorite? Did I miss one that should be added?

I’ve been a fan of the All-American Rejects since their first single, “Swing, Swing” came out when I was in high school. Since then, I have been to various concerts of theirs at completely different venues. Everywhere from an intimate concert at Starland Ballroom to a crowd of hundreds, maybe even thousands, at Giants Stadium for the Bamboozle Festival a few years ago. So when my friend invited me along to help cover a concert at the Sovereign Bank Arena in Trenton last summer, naturally I went. She was working on a piece for the Trenton Times about the venue and how it’s trying to attract a younger crowd. Hence, the concert, entitled Popfest, was put on by local radio station WPST 94.5 attracting many of its younger listeners. In addition to the All-American Rejects, performers included Nick Lachey, The Fray, Bo Bice, and The Click Five.

My friend was promised a press pass to interview some of the bands, but for some reason it fell through. This is where my ingenious Plan B came in. “Let’s just go find their tour buses,” I remember telling her matter-of-factly. And to preface the interview below let me just tell you once again, I am not a groupie, despite the fact that I did take a picture with some of the guys from AAR. They were really short on time, so we only got to do probably less than a 5-minute impromptu interview. But hey, I’ll take what I can get!

Do you enjoy playing shows like Bamboozle more?
Oh yeah. That’s like [Bamboozle] the voice of a generation all in one spot at the same time. They’re the future leaders of . Even though they may listen to music that’s not contemporary or run of the mill, those people are a lot different when they go to Bamboozle. The people who go to Bamboozle are definitely…I don’t know, more cerebral than normal people, I find. Whereas at these shows people scream and go crazy like five seconds after they see us. At Bamboozle a kid will be like ‘What’s up Tyson?’ and try to talk to you, as opposed to try to bombard you or scream until you give into some weird wish that they want. But it’s all fun.

Gotta love the honesty…here’s some pics with lead singer/bass Tyson and drummer Chris. 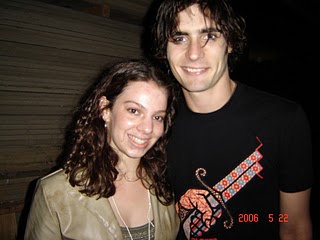 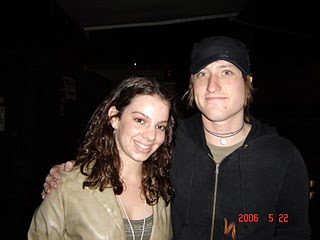