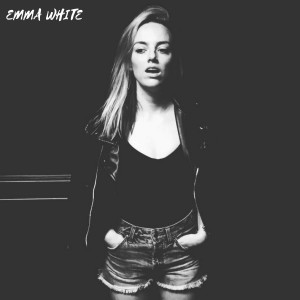 Songwriting Session is a column that goes behind-the-scenes with artists and songwriters. Each Sunday, a new songwriter will share their journey and provide lessons they’ve learned along the way. This week, Emma White shares what she has learned as a songwriter.

Emma White was born into a musical family as both her mother and grandmother were singers and songwriters. In fact, Emma was named after Emmylou Harris while her siblings are named after a James Taylor reference. So, it’s safe to say that music has been woven into her life from an early age. Over coffee at Nashville’s Portland Brew, White recalls her music filled childhood fondly.

White loved pop and R&B music while her family preferred country. Her latest EP blends all three genres and she credits her time studying at Berklee College of Music in Boston for helping her evolve as a songwriter.

The singer/songwriter wrote her first song as a teenager and began shopping her demos around at the age of 16. She’d often perform Lauryn Hill songs at talent shows in Maryland with the dream of being a singer. However, it wasn’t until she heard a Clive Davis interview where he stressed the importance of being able to write songs that she realized she should focus more on songwriting.

After living in Boston and New York, White made her way to Nashville although she admits she never thought she’d wind up in Music City.

“I was a New York girl, but every opportunity and every door that ever opened ended up being down here,” she says.

The first song she released professionally was called “His Eyes” and she first thought it was an R&B track. People advised her to submit it to a local Maryland radio station where it won an undiscovered talent contest with their country station. Suddenly, she realized she was actually writing country music.

White’s latest EP released on Friday (Feb. 3), merges her passions for songwriting, country, pop and hip-hop. While the songs include classic country songwriting the production hints at pop and R&B. This is exemplified in the standout song “My Ex,” co-written with Jesse Lee (Kelsea Ballerini’s “Peter Pan”).

“We kept that storytelling aspect of it, and then when I worked with my producers we really wanted it to be a hybrid of R&B and country,” she says of the song “My Ex.”

White’s new single “Not That Into You” is more pop based and sounds like a song that would fit in perfectly on radio in between Taylor Swift and Kelly Clarkson. She says it’s her favorite song she’s ever written and was inspired after a trip to LA. While attending an industry event a man there was making strong advances towards her. Taken aback, White turned the off-putting experience into a song that embodies a humorous portrayal of a girl pushing a guy away.

“I had seen the movie He’s Just Not That Into You and on my Facebook there are always ads: ‘Why are you single? This is why. Buy my guide.’ I thought in a theatrical way about [writing] it. I wanted to take on a gutsier character,” she explains. “I wanted it to be something a little bit shocking that you might not hear a female say. While I was writing it I sent it to my best friend who lives in New York. She had been on a million Tinder and Bumble dates and she was like, ‘I love this song. I totally get it.’ She wrote, ‘I’m not playing games or hard to get.’ So, I put it in the song and she’s the co-writer on this song.”

White’s new EP includes seven songs, all of which she co-produced, and spans several genres. She says this was intentional as she wanted each song to stand firmly on its own.

“For this album, I wanted to make every song stand on its own sonically. It definitely has an overall pop/country feel,” she shares. “Some songs lean more pop/rock and others have an urban thing going on. I really wanted to create a fingerprint for each song. There are certain melodies you’ll hear in certain songs and different textures in each song. It’s a blend of a lot of things.”

It has been a long musical journey for White, who now lives in Nashville full-time. She says if she could have told herself anything before taking the leap into music it would be to buckle up because there are a lot of highs and lows. She adds that having patience is important and stresses at being open to collaboration.

“I think co-writing has really expanded my sound and songwriting,” she admits. “You always learn from other people in the room. We can do so much more when we’re working together.”

She adds that she’s constantly trying to find a balance between success as a songwriter and simply doing it because she loves to write.

“You never want to have to compromise certain things. I think the biggest thing is staying true to what you think is good,” she says. “Being a songwriter is often a struggle but it’s all I’ve ever wanted to do. Performing, singing and music is woven into who I am. It’s always felt like it’s what I was meant to do. It chose me, I didn’t choose it.”

For more on Emma White visit her website and to purchase her music, click here. Catch Emma live in Nashville on Monday evening (Feb. 6) for Whiskey Jam at Winners Bar & Grill.