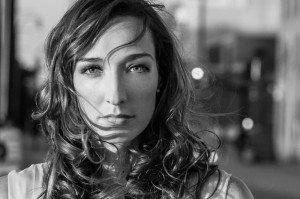 Songwriting Session is a new weekly column that goes behind-the-scenes with artists and songwriters. Each Sunday, a new songwriter will share their journey and provide lessons they’ve learned along the way. This week, Jenn Bostic shares what she has learned as a songwriter.

Minnesota native Jenn Bostic made her way to Nashville after studying at Boston’s Berklee College of Music. The singer-songwriter says after several visits to Music City throughout college, Nashville felt like the right choice.

“The more I came to Nashville it felt like home,” she tells me at Nashville’s Frothy Monkey. “I’m from a small town in Minnesota and Nashville felt like a place where I could fit in and find my spots whereas New York and L.A. overwhelmed me a little bit.”

Jenn has more than found her spot in Nashville, she’s made a name for herself in the music scene here and abroad thanks to her No. 1 song “Jealous of the Angels” which helped launch her career in the UK. “Jealous of the Angels” was co-written by Jenn and was a form of therapy for the singer as the song details losing her father when she was 10 years old.

“I started to play the song live and people were really connecting. They were coming up to me in tears saying, ‘This is everything I wanted to say for this family member or this friend,'” she recalls. “I kept thinking, ‘This is insane. There’s no way you could have told me when I was in high school wanting to be the next Carrie Underwood that I was going to end up telling my story about my dad and be vulnerable like this on stage.'”

Unbeknownst to Jenn, a woman found the music video for the song and sent it to a radio station in the UK who then played the song on-air. The phone lines blew up with listeners requesting the song and wanting to learn more about the singer.

“It’s something so much bigger than me. Pretty soon I was doing interviews from Nashville streaming to the UK and when I was on a tour over there it went to No. 1,” she says with a smile, still in disbelief. “It’s just this crazy journey of one minute I’m trying to have somebody hear my song to the next minute watching it go No. 1.”

Before the success of “Jealous of the Angels,” Jenn was struggling to find her sound. She released and recorded her debut album Jealous in 2013 and when she’d bring it to labels and publishers she was told she was too pop for country and too country for pop. Wanting to find her voice and knowing that she needed to tour to support the record, she decided to book her own tour in the Midwest with a friend, playing music at coffee shops for tips.

“My first tour was all cold calling. I wanted to be touring and since no one else was booking it for me I was like, ‘All right, I’m going to figure it out.’ I continued to do those runs where it was a week or two until I started to build a rapport with certain venues,” she explains. “Now I can call up venues and say, ‘I’ll be in town this date, can I have it?'”

Just like booking her own tour, Jenn’s publishing deal came about by putting herself out there and entering countless songwriting competitions. She won a European based songwriting competition called We Are Listening and for the competition that followed, her song was sent to the judges so they were aware of the type of song they were looking for. One of those judges, Jay Frank, happened to work at CMT and liked what he heard and reached out to Jenn.

“I was very hesitant because my songs are precious to me. He said he would love to start playing my songs for people and if somebody cut one we would figure out the details,” she explains. “A year past and he was becoming my mentor and giving me a lot of artist and songwriting advice. He was the first person in the industry who really believed in me.”

Jenn signed with DigPub a year after working with Jay and has been with the company for five years now. She admits she never knew that a publishing deal existed when she was growing up, dreaming of a career in music. She has since seen success with her music placed on television shows and cut by up-and-coming artists.

“To be able to know that my bills are paid to write songs every day, it’s incredible,” she adds with a big smile. “I love the writing so much but I also love singing the songs I’m writing. I don’t think you have to choose one or the other. There’s a lot of different ways to go about a publishing deal. Each deal is it’s own thing. The best way for me to do that was to get the music out there and increase my chances of that happening. I’ve played so many writer’s rounds, entered so many competitions. You have to get your songs out there so people know what you’re doing.”

While Jenn has seen success as a songwriter and as an artist, she admits that she has had her fair share of doubts just like any other artist. Her song “Counterfeit” off her latest album, Faithful, discusses what she calls “mind monsters” that often hold us back.

“Whether it’s people in your life trying to drag you down and telling you you’re not good enough to do things or your own voice in your head saying, ‘Well, you can’t do that,'” she explains. “As an artist, it’s an emotional roller coaster. You write a chorus to the song and your brain is telling you, ‘That’s terrible.’ And the other part is telling you, ‘That’s great!’ It’s constantly a back and forth with that.”

She adds: “For me, that song started with silencing those voices and silencing any negative thought that enters your brain. You want your true self to come out in the songs too. I’ve heard from friends that it happens in relationships as well. Thankfully, I have an amazing husband who that song is not about.”

Jenn wrote the song with Lauren Christy, a Grammy nominee and co-creator of The Matrix writing/production team (Christina Aguilera, Britney Spears, Rihanna), and says she came in with the melody and Lauren immediately said she had been saving the title “Counterfeit” for so long and it was exactly what she wanted to write about.

Other standout songs on Faithful include the title track, where Jenn looks back on the success she had with her last album and asks herself what type of person she wants to be.

“I think who you are when nobody’s looking, whether that’s scrolling to see what number on the chart you are, or whatever it is, that’s who you are,” she says. “My pastor said that to me one Sunday and I thought, ‘That is so true.’ I felt encouraged. What are we focusing on? How high is it on the chart or creating the next song that’s going to touch somebody’s life?”

While she says seeing radio success was fun and something she celebrated and is grateful for, Jenn still has more work to do.

“When push comes to shove, who are you? Finding that for myself through this whole artist process has been great. When I step on stage I know my brand and who I am and what I’ll say and what I won’t, what I’m okay with and what I’m not.”

Jenn Bostic will be playing Nashville’s The Bluebird Café this Friday, Nov. 20. For more on Jenn, visit her Website.

I could not be more blessed than by this child(truly a gift from above)! beautiful inside and out! A bit prejudiced but love her beautiful music as it comes from her precious heart and soul!