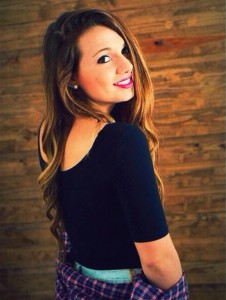 Songwriting Session is a new weekly column that goes behind-the-scenes with artists and songwriters. Each Sunday, a new songwriter will share their journey and provide lessons they’ve learned along the way. This week, Kaylee Rose shares what she has learned as a songwriter.

Kaylee Rose is doing things her own way. The 20 year old Florida native moved to Nashville to pursue a career as an artist and has shared the stage with Grammy award winning songwriters, always able to hold her own with her rapid fire lyrics and unique storytelling.

Kaylee grew up in Miami and was a hip-hop dancer and cheerleader before music became her calling. In middle school, her family moved to St. Augustine. Not having many friends at first, she picked up the guitar and taught herself how to play.

“When I was 14 my dad tricked me,” she recalls over tacos at Nashville’s Taco Mamacita. “He had my guitar in the car and instead of picking me up and taking me home he took me to a bar on my first day of high school to play a show. I went in and played a show and I got hired right there. I was like, ‘You can get paid to do this?'”

From that very first gig Kaylee was hooked. She’d play two to four nights a week for four hours at a bar, her parents always in attendance.

“I didn’t realize how much of a blessing it was, all the shows I did. I only took off homecoming and prom in high school,” she recalls. “Every other weekend I would play two to four shows Saturday through Sunday. At the time I kept thinking, ‘Why would I say no?’ I would feel so guilty when I would pass up an opportunity for a show. I thought everybody had that work ethic.”

Kaylee attended the University of North Florida for a semester but had her sights on Nashville so she moved home after she finished her first semester and played a gig every night for six months straight to save enough money for the move to Music City.

“I played over a thousand shows before I moved here. I thought everybody had that experience,” she says. “I didn’t realize all those shows would help me so much. All the four hour shows where I set up all my equipment and broke it down.”

I caught Kaylee’s performance at Nashville’s famed The Bluebird Café in October where she was in a round with country hit makers Chris DeStefano (Carrie Underwood, Luke Bryan, Jason Aldean) and JT Harding (Blake Shelton, Keith Urban, Kenny Chesney). When I ask her how she maintains her cool sitting alongside songwriters of that caliber she says she simply just does it.

“I try not to get intimidated. Obviously it is intimidating to be on the stage with people who have written some of my favorite songs that have won Grammys but at the same time, I’ve trained so long. I’ve been playing so many shows, I don’t have any right to get nervous,” she asserts. “I’ve worked too hard to let myself get nervous in those situations.”

She adds: “The biggest thing that I keep realizing that I do is that I treat this like athletes treat sports. The only way an athlete can be good at what they do and get to the top is if they practice every single day, no days off. I treat it like that. That’s why I play a show every day because I’m only going to get better. I know what people want to hear, what they don’t want to hear. I know how to work a crowd. When I do get those moments when I play with those hit writers I don’t choke up. That’s why I do that, just like athletes do. I’m proud that I work really hard. You have to in this town. Nothing is going to get handed to you. There are too many people with great talent. You can’t just be talented.”

Kaylee credits the Nashville Songwriters Association International (NSAI) for helping her form relationships with co-writers and get situated into the Nashville community. She crossed paths with NSAI’s Bart Herbison who saw something in her and set her up with co-writers.

“He really took me under his wing and we started meeting once a week and started building relationships with all the other people at NSAI,” she says. “I really took advantage of the fact that they hear so many songs so they know what sounds good and what Music Row needs and the level I need to be at. They’ve been really good at critiquing my songs and helping me become the best writer and artist I can be.”

Kaylee explains how it’s often easy to feel like the underdog in Nashville and the roller coaster of emotions life as a musician can bring. Having gone through the experience firsthand, she discusses her new song “Underdog,” which she co-wrote with Rachel Hutcheson and sings about these frustrations in detail.

“I hope ‘Underdog’ captures some people’s hearts,” she says. “I have to sing it to myself, ‘Okay, Kaylee, it’s okay. Nobody fights as strong as the underdog.’ I love this town, I love Nashville but it does get hard. When you have those hard times and you get back up, that’s the best part about it. Your heart won’t let you quit.”

When listening to Kaylee’s music, especially songs like “Underdog,” it’s easy to compare her hip-hop influence to that of Sam Hunt. Kaylee has been writing raps long before she moved to Music City though and admits her first songs, written when she was just 13 years old, included raps.

“I think a lot of it has to do with the fact that I was a hip-hop dancer before I picked up the guitar. And I’m from Miami so I’ve grown up listening to all types of music,” she explains. “When I first started writing songs I remember adding raps to them. And that was the biggest struggle, that’s why I didn’t know if I could move to Nashville. I was considering Atlanta because I thought I wasn’t country enough for this town.”

While Kaylee grew up listening to Shania Twain and the Dixie Chicks, she wasn’t sure her music would fit into the Nashville country scene because of its blend of pop and hip-hop. She credits Florida Georgia Line’s collaboration with Nelly and Sam Hunt for opening the doors of the genre.

“In Atlanta and in Nashville people in the industry were telling me, ‘You can’t be a bunch of things, you can only be one. You can only be country or pop. You can’t do both.’ That’s why it took me a long time to move here because I wanted to do both but there wasn’t a place for it.”

Kaylee Rose has since found her place in the Nashville music scene and refuses to compromise her style of music.

“I’m glad I always stuck with my gut. I could have just gone down that path of doing what everyone else told me to do and I never would have tapped into the style that I do now. When Sam Hunt did come out I was like, ‘Good there is finally a place for this now.'”

Kaylee Rose performs at The Listening Room in Nashville on Tuesday (Nov. 10). For more on Kaylee, visit her website and SoundCloud.