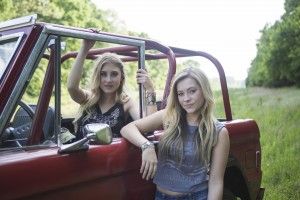 I’m convinced that 2015 is the year girls take back country radio. Country duo Maddie & Tae are proving just this as they released their debut album Start Here on Friday (Aug. 28) and it’s full of powerful songs all penned by them. I spoke with Maddie & Tae in April about their album and why it’s so important that the duo give a voice to other women on the radio.

“Giving girls a voice is so special to both of us and we just feel blessed to do that,” Maddie Marlow explains. “There’s all different types of songs on our record, all different types of stories. ‘Girl in a Country Song’ was one where we were like, ‘We know other people feel this way, and we’re gonna hold the torch for this message.’ And it worked.”

“Girl in a Country Song” went to No. 1 on the country charts and helped launch Maddie & Tae’s career. While the song called out the men on the radio for singing about girls in the passenger seat, Maddie & Tae’s album proves that they’re not just sitting back and looking pretty. Instead, the duo is driving full speed ahead with their vivid storytelling and smart lyrics, showing why females should be heard on country radio. Their second single, “Fly” is an inspirational song that urges us all to keep on climbing those insurmountable obstacles while other songs like “Shut Up and Fish” continues the humor of “Girl in a Country Song” by putting a guy in his place when he clearly has much more than fishing on his mind.

“I think people were noticing that you never hear a woman’s voice, or perspective, on the radio,” Tae Dye adds. “So that was important for us to hold that torch and be like, ‘OK, we’re gonna bring women back and we’re gonna come at it full force with a very strong message that we’re very passionate about.’”

“Both of us were raised as strong, independent women who have trouble putting their guard down,” Maddie continues. “Songwriting was a challenge for both of us, to go in a room, and pour our hearts out, sometimes to a stranger if we were working with a person we hadn’t written with before.”

She said being that vulnerable is something she and Tae struggled with in the writing room but it’s that vulnerability that has allowed them to write their best songs.

“Strangers have come up to me and said, ‘Your song did this for me because this thing happened in my life,’ because we allowed ourselves to be so vulnerable,” Maddie says. “I think there’s something so beautiful about that.”

Both Maddie & Tae say that Start Here is their complete truth. The album is 11 songs that tell the stories of their lives over the past five years, all of which they co-wrote themselves.

“The title explains everything,” Tae asserts. “We choose Start Here as the title because it’s just the beginning and it’s the first taste that our fans are getting and we plan to make make many more and there’s not going to be an end.”