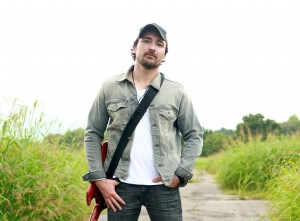 Songwriting Session is a new weekly column that goes behind-the-scenes with artists and songwriters. Each Sunday, a new songwriter will share their journey and provide lessons they’ve learned along the way. This week, singer-songwriter Erik Dylan shares what he has learned as a songwriter.

The path to a career in songwriting is different for every writer. In Erik Dylan‘s case, it took rejection from a songwriting program at Middle Tennessee State University to fuel his determination to make it as a songwriter. The Kansas native transferred from University of Kansas to MTSU in Murfreesboro, Tenn. with the goal to get accepted into the songwriting program. Erik recalls the professor of the program said he wasn’t cut out to be a songwriter. Harsh words for any aspiring songwriter to hear, Erik put his songwriting dreams on the back burner and gave up writing for two years.

“When somebody says that to you–that they don’t think you’re qualified to even be in their program–it makes you question whether you’re on the right path,” he says over the phone from his home in Nashville.  “It took a little while but I realized I wasn’t happy unless I was writing and that was what I was meant to do. If one guy said I wasn’t a writer it didn’t matter to me, I was still going to chase it. I’m 100% glad I did that. I proved him wrong.”

Erik graduated from MTSU with an audio engineering degree and started working on his songs. It was that early rejection that gave him the fuel to keep writing. He says it took six years working day jobs in Nashville and getting better at his craft until he felt like he was ready to start playing open mics.

“That’s where Kip [Moore] saw me and that’s how I got my publishing deal,” he adds.

In 2011, country singer Kip Moore heard Erik performing from the speakers outside of an open mic in a nearly empty room as he walked by the venue. At a time when Erik himself was wondering why he was even there, playing to three of his own friends, his luck was about to change. Clearly moved by what he heard, the country singer introduced Erik to his publisher, Brett James, and shortly after Erik got his own publishing deal with Cornman Music. Since then, he has written with a wide range of artists including Kip Moore, Eric Paslay, Randy Montana and Logan Mize.

“One thing I’ve noticed after writing in town for a publisher for almost four years is that I write my best stuff when it’s coming from the heart and it’s exactly what I want to be writing,” he explains. “If I’m trying to chase something that’s out right now, that’s on the radio…some people will ask you to write songs to sound like this type of song that’s out on the radio right now. I’ve noticed when I’ve tried to chase things that I don’t feel the songs aren’t going to be that good. Write what you know and write from the heart and you hope someone else understands that.”

Erik adds that the listener can always tell if the emotion within each song is true or fabricated.

“If it’s real and from the heart, people notice that. They believe it,” he adds. “In general, the best songs that I write are always ones that have a personal attachment, that something has happened to me or I see a friend go through something. That’s where I tend to write my best stuff. When it comes down to it, I like to write about personal experiences and things I go through. I try to channel back to where I grew up in Kansas. It’s a very blue collar farming community and I write songs that relate to the people that I grew up with.”

One of those songs is “Comeback Kid,” which can be found on Kip’s new album Wild Ones. Erik wrote the song with Kip, Ross Copperman and Jeff Hyde and recalls what was going through his head in the writing session.

“As songwriters you understand struggle and that it takes a while for things to happen. I was thinking about my wife in that position,” he recalls of the songwriting session. “Me spinning my wheels in Nashville trying to get a publishing deal while she helped out economically more than I could.”

He explains that the hardest part of writing a song is whittling down a story into three minutes while trying to describe a large idea in as few words as you can. He says the best person that does that is Ernest Hemingway. While he wasn’t exactly a songwriter, he was a storyteller.

“In five words he could tell any story. He could whittle any idea down to five words and you could understand what he’s talking about,” Erik asserts. “A lot of that is trial and error when you’re writing and realizing what needs to be in a song and what you can leave out of a song and still get your point across.”

Erik explains his writing process as trying to write whatever is on his mind that day. He has lists of different titles and song ideas he has compiled over the years and often brings those to his co-writes to brainstorm.

While Erik writes mainly on acoustic guitar, he says many songwriters are also track writers. The writer will get a track going with drums, bass and guitar and begin writing melodic and lyrical content to that track. For Erik, his first step is guitar and then the lyric and trying to make his lyric melodic. He admits this is often the toughest for him.

“I’ve always been great at lyrics but I’ve always had a hard time making that lyric work melodically. A lot of writers who don’t play instruments, I recommend to get karaoke music to the genre that you’re trying to write to and sing along with those songs. A lot of the chord changes are similar no matter what song it is. You could start finding other melodies just by listening to that music.”

He adds: “It’s a really good way to think of new melodies. You don’t have to think about playing guitar or lyrics. I’ll play karaoke from different artists–they have instrumentals of everything–and I’ll start singing melodies along with that music. Usually I’ll find something that falls out. It’s always a good way to cure writers block. It works, I’m serious. Because you’re singing along with songs that are on the radio and you’re not hearing that melody, you can take the melody and take it to a different place and change the music to what you’re doing and you have a song. It’s a good thing to do if you’re not an instrumentalist.”

While he admits songwriting is a lot of trial and error, Erik stresses the importance of finding people you feel comfortable writing with.

“What I start seeing in certain writers that I write with a lot is I know we write this type of a song well together. I know how to pitch my ideas to certain writers. We know each other so well in the room that we don’t have to think about whether the other co-writer is going to like the idea. We already know.”

So how does he know if he wants to keep the song he wrote for himself or give it away to another artist?

“The cool part of what I do is seeing the song shine whether it’s coming from me or coming from a different artist. I’m prouder of the song than anything else. That’s a win win for everybody. To a songwriter, the song is always ours,” he stresses. “Getting a song into commercial radio is such a difficult task anyway that there’s no way I would hold songs just for myself and run the risk of maybe they’ll never get released. I would rather see that song out there and that it means something to a listener. A lot of artists bigger than me can reach more people with a song. I’m more than willing for them to take the song and make it their own.”

To hear more demos from Erik Dylan, visit SoundCloud or his Website.