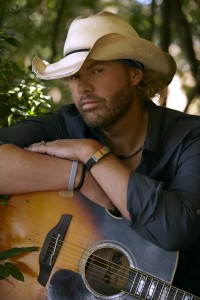 Songwriting Session is a new weekly column that goes behind-the-scenes with artists and songwriters. Each Sunday, a new songwriter will share their journey and provide lessons they’ve learned along the way. This week, country singer-songwriter Toby Keith shares what he has learned as a songwriter.

In July, I spent some time with Toby Keith at a tour stop in Connecticut during his Good Times & Pick Up Lines Tour for my first cover story for Nash Country Weekly. Our chat was focused on songwriting as the country singer-songwriter recently was inducted into the Songwriters Hall of Fame, the only award Toby says he has ever wanted. During our chat, I asked him how important it was to be able to play guitar or piano in order to write songs. Surprisingly, he told me being familiar with guitar shouldn’t be my main focus. Below is an excerpt of our chat.

“You don’t have to be a great musician, but it’ll help you if you can play enough of one instrument, a guitar or piano,” Toby tells me while lounging on a leather couch at the front of his bus. “You’d have a hell of a time writing on a flute I think. As long as you can play chords and understand how music’s made you can create your own melodies then.”

He then asks me if I play guitar and I admit that I only picked it up a few months ago and have been taking lessons every week. I explain that my biggest problem is hearing the melody, so my hope is that by learning guitar it will become easier for me to hear the lyrics that I’m writing and the flow of the song.

“There are people who have written big time songs and never played anything,” he says, explaining that it’s not important that I learn how to play guitar, but instead that I should understand the structure of the music.

“In your case, I’m gonna tell you to hear a song, write one down that you like and then throw the music away and read the words and see how the poem is on paper,” he advises before he starts to recite his first No. 1 hit, “Should’ve Been a Cowboy” to me word for word so I understand what he means and notice the rhythm of the song.

“So it’d be like, ‘I betcha never heard ol Marshal Dillon say/ ‘Miss Kitty have you ever thought of runnin’ away?’ / Settlin’ down would you marry me / If I asked you twice and begged you pretty please / She’d of said yes in a New York minute / They never tied the knot his heart wasn’t in it / He just stole a kiss as he road away/ He never hung his hat up at Kitty’s place.'”

In that moment I could hardly believe my luck, getting songwriting tips from the Songwriters Hall of Fame inductee himself, Toby Keith. His advice didn’t stop there, though.

“And then you can see the structure of that particular way to write it. Just open up a bunch of lyric sheets on the Internet and read people’s songs. If you’re just going to be a lyricist I think you can write like that and then somebody can take a great idea that you had and put music to it,” he stresses. “You could do that. You’ll probably be more productive quicker that way but they go hand in hand when you’re writing songs.”