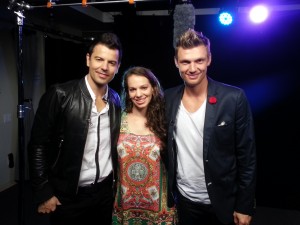 This week was truly a bucket list moment for me as I sat down and interviewed a Backstreet Boy in person. My 12-year-old self was definitely freaking out on the inside. And, I’d be lying if I said my 29-year-old self wasn’t just as excited. You see, I grew up a hardcore Backstreet Boys fan. I attended all the concerts, knew all the words to every song, tried to learn the dance moves, and my childhood bedroom in Jersey was covered from floor to ceiling in posters of the guys. Yes, I even thought one day I’d marry one. (Brian Littrell was my favorite in case you were wondering.)

A few months ago I learned that BSB’s Nick Carter and New Kids On the Block’s Jordan Knight were teaming up to release an album. Fittingly, they named themselves Nick & Knight. Flash forward to this past Wednesday when they came into my office and I sat down with them for an interview. I can’t deny the nerves I had right before they walked into the studio at CBS. But, I took a deep breath and reminded myself that I’m a professional.

As the guys were putting on their mics, I just sat there watching them joke with each other, saying they were releasing their first reggae album in questionable accents, asking what kind of animal fur our boom mic was made out of and clearing their throats extremely loud as they were testing the mics. They even took time to compliment me on my dress, saying how much they loved it. (Yes, I was secretly dying on the inside, but surprisingly didn’t blush at all!)

Once I asked my first question the nerves thankfully vanished and I was impressed with how passionate Nick and Jordan still are about creating music and touring. They told me that they approached their debut album with more of an indie outlook than a big, pop boy band record. They also admitted how they hate the term boy band, but it’s something they’ve had to live with for decades now.

You can get a feel of their musical direction in their single “One More Night” below. Stay tuned for my complete interview which will be posted next week which includes both of the guys talking about their debut duo release, the self-titled Nick & Knight, as well as Nick opening up about his reality show I Heart Nick Carter which premieres on Wednesday, Sept. 10 on VH1.

And for my cousins who are anxiously wondering if I asked Nick to teach me the “Everybody (Backstreet’s Back)” dance, I didn’t. But that’s not to say that he didn’t do some moves from the video during the interview! Stay tuned for a few fun features I asked the band about too. All in all, sometimes things are well worth the wait and finally sitting down with a Backstreet Boy after all these years really is a dream come true.