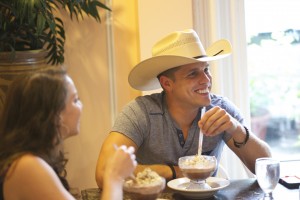 Last November, I visited Nashville for my 29th birthday. The way I saw it — as a country music journalist and country music fan — there was no better place to spend the last year of my 20s than Music City.

While there, I attended a Spotify event that showcased Jennifer Nettles and her upcoming solo material. It was like a scene out of Nashville – country artists and actors from the show Nashville mingled with each other while the liquor flowed.

At the end of the night, I met Dustin Lynch. When the “Where It’s At” singer learned I was from New York he quickly told me that his favorite spot in the City was Serendipity. A self-proclaimed chocoholic and frequent patron of the quaint dessert establishment myself, he told me I should move to Nashville and open Serendipity Nashville. Not a half bad idea for this country music loving chocolate addict. So, when I learned he’d be coming to New York for press on his upcoming sophomore album I knew Serendipity was the perfect spot to catch-up.

A self-professed sweets fanatic, Lynch said he first stumbled upon Serendipity years ago when he was on the hunt for cheesecake in New York. His publicist had recommended Serendipity.

“We got here and it was like, ‘Wow!’ Every dessert that came out was bigger than life,” he told me.

So what did he think of his Frozen Hot Chocolate?

“Good grief,” Lynch said, after taking his first sip. “The gym has to happen tonight,” he said grinning, before going in for another sip. “We can run to dinner.”

The conversation eventually turned from frozen treats to music—specifically, Lynch’s new album Where It’s At. It’s his sophomore release, and thanks to the popularity of the title track, the momentum is already building fast.

Read my complete interview with Dustin Lynch on Radio.com.