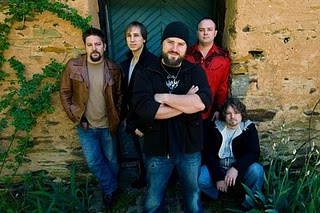 Of all the bands that performed at 2009’s CMA Music Festival, I was most impressed with Zac Brown Band. Their stage show is dynamic and their musical interludes bring reference to both classic jam bands and rock & roll groups. While they’re most often placed in the country genre, don’t let that fool you — Zac Brown Band know how to rock more than most groups out there today.

I sat in on their interview at last year’s CMA press conference and was amazed at the band’s humility and dedication to fans. Read below to find out about the band’s hit single, “Chicken Fried,” and why CMA Music Festival is so important to them. Be sure to catch Zac Brown Band live tonight on “Late Show With David Letterman.”

You were at Bonnaroo and are now at CMA Music Fest. With two big events in Tennessee, can you tell us what has gone on at each?
Last night [at Bonnaroo] was amazing. Just an amazing night and amazing fans. We were able to pull out all of our other styles that we do and played 100 minutes. Tonight’s going to be amazing as well. There’s 70,000 people out there and a lot of these folks we’ve never played in front of before, so we have the chance to blow them away.

You recorded a song at Kid Rock’s studio. How was that?
We had an amazing day in Detroit. We played Hoedown for between 300,000 and 400,000 people there. Kid Rock came and sat in with us during our show and we ended up hanging out with Willie Nelson on his bus for a while after that. Sat in with Willie Nelson that night. Then, at midnight, went back to his house at his studio. We actually woke up a couple of the guys from sleeping and recorded this new song that we’re working on and it’s called “Colder Weather.” It’s actually my favorite song that we have ever written.

Did you ever imagine “Chicken Fried” would do so well?
We all had a feeling because we used to play around a lot. We played for five years together as a band, just playing in bars and small clubs and the amount of people that kept showing up and requesting that song. A lot of the songs we played were originals that they liked. But, especially with “Chicken Fried,” it was a show stopper. People went crazy. We had a little bit of an idea, but when you see it all come about and the rest of the country realize how much they love the song, it was pretty surprising as well.

I heard Alan Jackson was pitched “Chicken Fried” first. How do you think things would have gone if he cut it instead of you? What single would you have put out first instead? (video below)
I was excited to find that he found the song and wanted to do it. We share the same producer. I was honored. Anything he wants to cut of mine, he’s welcome to cut. He’s a legend. I think career wise, it was a little bit challenging at first when we put “Chicken Fried” out because the only thing people knew about us was that song so we were the chicken band. So now, I’m glad we have other singles coming out now. We’re not so much the chicken band, people are realizing we have more than just that song.

You said in an article that you’d love to put out two albums a year. Do you have other ways to get all that creativity out there before they accumulate so much?
We’re doing a live DVD and double CD in October. We’re going to be recording in Fox Theatre in Atlanta and that’s going to have a bunch of the new songs on it. Our creative outlet is that we write at a much faster pace than we could even arrange the stuff as a band, much less release it for the fans. We’re going to be on track to do one studio record and one or two live CD’s a year so we can have an outlet to do these kinds of things. We have so many songs and we’re always writing along the road so we’re going to figure it out. Even Brad Paisley, having four number ones in a year is an amazing pace to be able to continue and have four songs released and recorded out there and be able to do it, it’s definitely a challenge. But as more as the singles are getting out there, the awareness of the record itself has been there and there are people in towns that we don’t even know that know words to all our other songs so we’re very blessed.

What makes CMA Festival special to you guys compared to other festivals?
It’s our way to give back to the fans because we realize that we wouldn’t have our life in music if they didn’t buy our music and buy a ticket to come see us play. We try and have as many meet and greets and signings as we can on the road. Essentially [CMA Fest] is one giant meet and greet. A chance to give back to those people and make new acquaintances with them and to let them know that they’re really our bosses and our fan base that allows us to have our lives the way they are. We’re very blessed to do what we love to do and to make a living doing that. All the fans are responsible for that.

Bid on A Night to Remember with Taylor Swift at myworkbutterfly.com to benefit vh1 save the music!
May 13 – 23

MyWorkButterfly.com announces auctioning off "A Night To Remember with Taylor Swift", four-time Grammy Winner and youngest artist in history to win music industry's highest honor, the GRAMMY Award for Album of the Year. At the 2010 GRAMMYs she took home additional awards for Country Album of the Year, Best Country Song, and Best Country Female Vocal Performance.

MyWorkButterfly.com
MyWorkButterfly.com, the most comprehensive social networking site that provides free resources to help return-to-work moms and working moms, is made up of a community of parents who have an overwhelming desire to make a positive impact in the lives of children. Learn more at MyWorkButterfly.com

I am so happy to read this. This is the kind of manual that needs to be given and not the random misinformation that is at the other blogs. Appreciate your sharing this best doc.