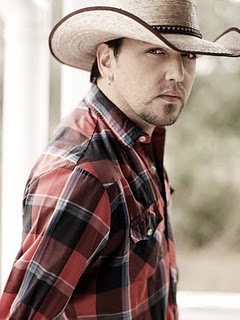 Country rocker Jason Aldean is known for his energetic stage show and unapologetic southern rock. He’s toured with everyone from Keith Urban to Rascal Flatts and Tim McGraw. Many of his singles have topped the country charts and he is currently leading nominations for the upcoming CMT Music Awards. Read below to learn about Aldean’s live show, his thoughts on rap music, Kid Rock and more from last year’s CMA Music Festival press conference.

You are moving up to that next level. From the inside looking out, are you able to feel that?
I think you can feel a little bit of a momentum. When “She’s Country” was out and peaking and doing it’s thing, I knew it was different than any other song I had. It’s not rocket science, I could tell that. When you play a show and you start seeing more people coming to your shows. One thing I noticed was that they were a lot more rabid than they were before. A lot more stage jumpers and things like that. I think you feel a little bit of it. It’s not an overnight sort of deal, but gradually you can feel a little bit of a momentum there.

Is there anything that’s happened in your career that you didn’t expect?
I don’t know. I think there are a lot of things like that. I remember the first time I played an awards show I remember thinking that it was going to be so crazy. But, all of a sudden you play and it was two minutes and you’re done and I thought, “What the hell happened? That was so quick I didn’t even have time to enjoy it.” It’s like anything, you always have things set in your mind the way you think things are going to go. A lot of times they exceed your expectations and a lot of times they fall a little short, but it’s fun nevertheless.

What is it like performing live? How do you sustain your energy?
I grew up playing in clubs. I came up playing in bars in Georgia, Alabama and Florida. It was my job to go out and play. I used to have to play four hours a night so to have to go out now and only play for an hour in a half, that’s nothing. It’s fun. I love getting onstage and playing my show. It gets me excited when people show up and you walk out and you see all those people that are there to see you play. They spent their money to come watch you play, especially nowadays. It’s up to me to give them a show and make it worth their while. You want them to come back and you want to make it fun and interesting and exciting so the next time we come to town this is one of the things they want to see. It’s all about creating a fun atmosphere. Some of my best friends are the guys onstage with me every night, so that helps. We’ve got a great job so we have fun with it.

How is it sharing the stage with Kid Rock?
You know what, I’m a big fan of his. I love Kid Rock. I’ve had the chance to hang out with him a few times. Talk about things that weren’t what you expected, he’s a prime example. I expected him to be this wild head case, but he’s not. He’s really cool. Really down to earth, fun dude and I’m a huge fan.

You were really looking forward to touring with Keith Urban and did more dates than you originally expected. You’ve opened for Rascal Flatts and Tim McGraw also.
I’ll say this. His show is the best show I’ve seen in a long time by far. I love the Flatts guys, they’re great friends of mine and they put on a great show. McGraw and those guys do as well. But, Keith Urban’s show is good. I don’t throw out compliments on people’s shows very often. His is really good. It’s one of those things, if you’re going to spend money to see a show this year, whether or not  we’re the opening act on it, I would check his show out ’cause it’s amazing.

Your song “She’s Country” has more of a rock vibe to it. How much do other genres of music influence your style? (video below)
I’m influenced by a lot of different genres. I grew up in Georgia. My dad always had traditional country music in our house. His favorite singer was a guy named Johnny Rodriguez. So, I used to listen to that stuff. Hank Jr., Merle Haggard. When I got a little older, I started to get into the 80s rock stuff. Guns N’ Roses, Poison, all the really bad hair bands. Then a little later I got into the southern rock stuff. The Allman Brothers and Lynyrd Skynyrd. I’ve listened to everything. Rap has been the only thing I’m a little dicey on. It’s either hit or miss. There’s maybe a song I like every couple of years. I think most of that is probably because I don’t understand half of what they’re saying. For the most part, I think music is music and if it’s great, I listen to it.