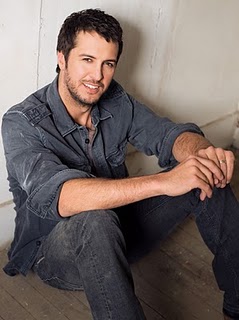 Awarded Top New Solo Vocalist and Top New Artist at the Academy of Country Music Awards last month, singer-songwriter Luke Bryan is making a name for himself in the country music scene. While hit ballad, “Do I” topped the charts, current single “Rain Is a Good Thing” is following suit as 2010 gears up to be a promising one for Bryan. Most recently, he was nominated for CMT’s Breakthrough Video of the Year for “Do I.”

Last year, I attended CMA Music Festival’s nightly press conference and asked Bryan a few questions. To find out more on his hit song co-written with Lady Antebellum, his thoughts on headlining and plans for this year’s CMA Music Fest read below. Stay tuned for more interviews from 2009’s CMA Fest next week.

How has your experience been so far this week at CMA Fest?
It was good! We did our fan club party yesterday and I realized that…I guess we had two hours and I was like, “We gotta do four next year.” I really wanted to sit down and talk. My drummer does a mean Aaron Neville and we let him come around and sing a little Aaron Neville. I actually wanted to do more [of that] because that’s stuff we do on the bus. Whatever gets you through the monotony of riding down the road. I wanted to do stuff like that with every musician in my band but we were running out of time. I wasn’t doing any songs and I think they probably wanted to hear a few of those. It’s been great watching the fan club grow. Next year we’re thinking about having two fan club parties or a bigger event.

What do you want to do when you have the headlining stage?
You dream your whole life to headline and I’m using this time now to work out kinks and get smarter and get bigger. I’ve got it all in my head, but it’s just the time to get there. I love when people say, “We feel like you already are a headliner.” But, I know I’m a long way from it. The beauty of last year getting to tour with Kenny [Chesney], you see headlining at the largest scale possible and what’s involved. I remember that whole tour I just sat back and watched it all and took it in and saw the things he did. Even when I was out front watching Keith Urban on a lot of those dates, I’m always memorized by the headliners. Just how they take over you. That’s what you work at and work hard for. The best answer is, I’m constantly dreaming of it and being prepared for that moment when you feel that momentum to where you’re fixing to start selling out 5,000 seaters. That’s what I pray for every night to get to that point. But, not to say I’m going to join that right now either.

What about the 60,000 outside at LP Field tonight?
Well, talking about Kenny, that was the beauty of that tour. It gets me comfortable in that environment. It’s been a year, but I walked out there [tonight] and I felt like I knew how to point at them way over there because I got a chance to do it last year with Kenny. It feels good to walk out there and have that many people looking at you. It’s what it’s all about. If you’re not prepared…you gotta go do that, so you have to be ready for it. It’s fun be comfortable up there.

You have a trio of friends that helped you out on your new single.
Charles [Kelley] and Dave [Haywood] of Lady A helped me write my current single, “Do I.” I wouldn’t say helped. We all wrote it together. They drove up to the house, we sat on the porch and drank a couple beers and now I have a single out. When we demoed it Hillary [Scott] heard it and flipped out over it and said, “Luke you have to cut it!” When we recorded it, there was no other background singer I could use other than Hillary. Lady A is all over that song. It’s been fun. I was on their bus earlier and showed them the video. We just got done with the video for it. To see their excitement…they’re there winning all the group awards and to watch them get excited about having a Luke Bryan song out there is a pretty special thing.

What are you thinking about while you’re onstage performing?
I really don’t know. I went through a point when I was out with Trace [Adkins] and I started thinking about what was going through my mind and the only thing that would happen was I would forget the words to my song. You try not to get too heady with it. Back to the headlining thing, there will be a day where I’ll have to be in one spot. Right now, that’s the fun part. My guitar player and I have been playing together for 13 years and we can just look at each other and make a move that hopefully looks somewhat planned and not stupid. I think the spontaneity and the non-structure of it makes it more comfortable. When you see someone walk to that spot and do their run of the mill poses, I’ve never been a fan of that. I’m crazy when we’re out there doing 140 shows a year. When we get 10 in a row where they’re the same that’s when I start losing momentum and talk to the band and say, “Guys I’m going to start calling out crazy stuff” just to break the monotony of it.

On September 26th, you’re the honoree spokesperson for National Hunting and Fishing Day. How is it to share something you already love and are passionate about?
It’s funny, when I heard I was doing that you don’t know exactly how big of a deal it is. About two months in, after several PSA’s and doing all that, I remembered the time with my dad we spent outdoors and just how important that is for children. You’re fishing and you’re hunting and that’s not the real deal that’s going on. You’re spending time with your family. I remember all the lessons. Me and my dad would fish every weekend it seemed. It’s been an honor to share some stories of mine and hopefully build more awareness. More and more of the outdoors are getting smaller. I just hope I bring awareness to it and get some people out there enjoying the outdoors.

Your single “Do I” has really allowed you to spread your wings both creatively and vocally. Was there any anxiety about new single because it is a departure for you?
Yeah. My first departure with “We Rode in Trucks,” my second single, didn’t go as well as I had planned. With “All My Friends Say” I think everybody wanted to keep hearing up-tempo, fun, party stuff. Everyone wanted a big summer hit and to come out with a ballad, we thought about it for a second, but we had so much excitement about the song. When you hear this song recorded you feel like it’s great. I feel like it’s really a great shot and my chance to show a different side of me where I sing some. To branch out and have a shot at hopefully a big top 5 or even a number one and have everyone so excited about it was fun too.

Watch Luke Bryan perform “Do I” below, for the official music video click here. For more, visit his Web site.