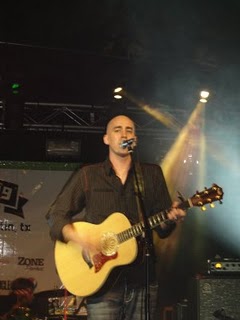 By the end of Thursday the craziness that is South By Southwest was starting to take a toll on everyone. Exhaustion hit, but good exhaustion from catching so many talented bands.

I started my day off with the roomies checking out the American Apparel sale before brunch (not much of a shopper so didn’t wind up digging through the massive boxes that were there). Afterward, I met up with Tyrone Wells at his MySpace showcase for a quick Q&A.; A man of many metaphors, it was refreshing to talk to someone with such a great view on life and music (see photo of his performance above). Stay tuned for the full interview soon.

Traveling by myself and going to most of the showcases solo has been a learning experience for me. I’ve covered shows alone before, but usually in New York or New Jersey where I’m familiar with my surroundings, so it’s always a thrill to see a familiar face here in Austin.

After catching Tyrone’s amazingly impressive set at La Zona Rosa (literally a 30-minute walk from my hotel — ugh!) I ate at The Parish planning on catching Lisa Hannigan‘s performance at 9 p.m. But, turns out I was at the wrong venue — major bummer. By the time I finished my food and realized this the line to catch her set was enormous so I figured I’d head to Stubb’s and catch Gomez.

Change of plans. On my way to Stubb’s I ran into the Lights Resolve guys and spent the rest of the night catching shows with them. It was so great to see familiar faces finally and I was glad to spend time with people I actually knew. First show of the night with LR was Liam and Me (definitely recommend catching if you’re into energetic indie-rock pop) then As Tall As Lions then Paper Route. The drummer in Paper Route was phenomenal — I couldn’t keep my eyes off of him! We ran into Joseph Gordon-Levitt on the way (Angels in the Outfield, 10 Things I Hate About You anyone?) Overall, a great end to the day. More to come in the next few days. In the meantime, be sure to follow me on Twitter! 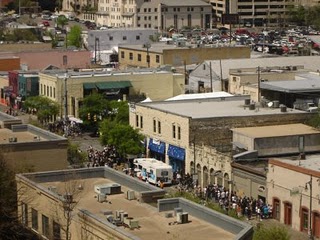 About to head out to 6th Street to catch a night of shows, I’ll have some brief show recaps for you tomorrow! Above is the view of 6th Street from my hotel window — the street is lined with tons of concert venues!