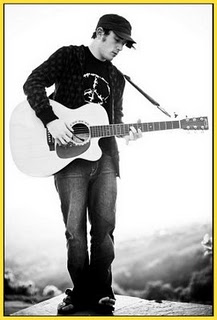 Definitely one of the most humble and down-to-earth musicians I’ve interviewed, Jason Reeves took some time out to chat with me when first arriving in Texas. His modesty is truly a testament to his character (sample quote: “I have a hard time coming up with things to say about myself. I’m just lucky that people want to ask because if they didn’t ask then I’d just be silent.”)

Perhaps most known for his co-writing efforts on Colbie Caillat’s debut album, Coco, Reeves’ latest release, The Magnificent Adventures of Heartache (and other frightening tales) is an impressive album, most notable for his strong, wear-your-heart-on-your-sleeve lyrics. Read below for Jason’s take on South By Southwest and be sure to give him a listen on MySpace and if you’re at SXSW, check out his showcases listed below.

Is this your first time at South By Southwest?
This is my third time. I came three years ago and then the year after that and I skipped last year, but I was never playing my own music I was just watching for the most part.

So this is your first year playing?
Yeah.

What is it about SXSW that attracts you as a musician?
Just the circus-like insanity of it all. Everybody comes here. The point to come is to play for people that you wouldn’t normally get to play with. For some reason, the fact that you’re playing at Southwest makes them more interested in you than they were before.

What would you tell people going to the festival to catch your showcase?
I’m a horrible salesman; I’m never going to sell anybody on myself. I feel like if they want to come watch me play, then my music is the reason they should come see it. I’m not trying to trick them into anything. I’m not a rock star; I’m just a boy that plays songs. If they like my songs then they can come watch.

What do you feel sets you apart from the hundreds of other bands that are showcased here?
I don’t know. You have to ask that question as to what sets yourself apart from the millions and billions of other people in the world. It seems like if I had to answer that I couldn’t get around the fact that I would feel like I was being an asshole by trying to separate myself in terms of, “Well I’m better than all the other bands because I do this.” I hope there’s something different in the way that I write or in the way that I sing that sets me apart in someway. Not in a better or worse scale, but just in a different scale.

Do you go about preparing for a festival differently than your own tour?
No. Actually, we’re at the end of the last leg of our own tour so it just feels the same. It’s still driving around in our van and unloading our stuff at a building and playing music. It’s weird being able to stay in the same city for more than a night though, so that’s what’s different.

You have so many interviews and showcases lined up. Do you get to enjoy the festival as a musician?
I have no idea what this is going to be like because we just got here about 10 minutes ago. I assume it will be more like a whirlwind where I don’t even get to notice what’s going on most of the time. I don’t think that it’s different from being at SXSW in general because it’s just crazy here. I have yet to see, so we’ll find out tomorrow or the next day.

What’s your advice to festivalgoers?
Be prepared to stand in infinite lines. Have patience. Get drunk to deal with the lines and eat as much BBQ as you can before you leave. Also, jump in rivers to escape the heat.

Where are these rivers that you’re talking about?
You have to go out of town. It’s not very far; it’s sort of out on the edges of town. There are a few rivers. One in particular that’s sort of turquoise that just looks like a magical turquoise lagoon that I remember jumping in last time we were here, so I’ll have to try to find that.

Do you have a favorite song you like to play during your set?
I like “New Hampshire” and “Gasoline.” Those are my two favorites.

Do you ever hold back in songwriting because you don’t want to reveal too much?
Well, that’s the exact opposite of what I’m trying to do. I’m trying not to hold back. That’s the reason I write. I feel holding back would only muddy it down and that would leave it less pure. I think that’s what I’m choosing to do. Being a songwriter is letting people know what’s up, which is a very weird idea. It’s not what normal people do. Everybody is so guarded and secretive with their problems and emotions and joys, but I think that’s also what causes all the wars inside of them. That’s the reason I started writing in the first place — to put that all outside of me rather than let it rage within.

Have you always wanted to be a musician?
I wanted to be Michael Jackson when I was a little kid for as long as I could remember. It wasn’t until I was 17 that I realized that I wanted to do this. When I started playing guitar and writing music I understood that that’s what I needed to do for now. I plan on doing other things, but for now its pretty much all I can handle.

You can read this interview on MarieClaire.com here.

Jason Reeves is hot, but not as hot as Nathan Bennett of The Elms who was smokin at SXSW.

Haha…Jason is so cute, I love his little life stories intertwined throughout his set. The Elms were great live too! I should see about doing an interview once their album comes out.

[…] all my interviews, so if you haven’t yet be sure to read my already posted interviews on Jason Reeves, Tyrone Wells and Meiko (click on each artist’s name and it’ll bring you directly to […]