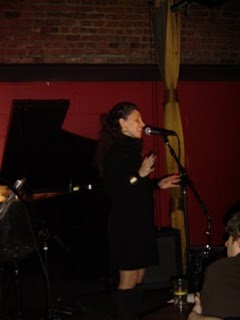 Rockwood Music Hall was packed Thursday night for Jamie Leonhart‘s set while the crowd only seemed to get larger as the night progressed. Performing songs off her latest release, The Truth About Suffering as well as some covers, Leonhart had all in attendance laughing along with her onstage banter and occasionally forgotten lyrics.

With husband Michael Leonhart playing piano throughout the night, Jamie blamed her lyric mishaps to being pregnant, later telling the room, “This is the first outing for the Leonhart trio at Rockwood.”

I first witnessed Leonhart live back in December when I covered the “A Holiday Benefit” concert. Of her performance, I wrote: “Leonhart’s vocals are heavenly as she blends jazz, pop and soul together, making for a truly impressive set. Comparisons to Ella Fitzgerald and Aretha Franklin can be heard throughout Leonhart’s classically elegant tunes.”

After seeing her nearly hour set Thursday night, my previous thoughts haven’t changed. If you get a chance to see her perform, definitely jump on it! 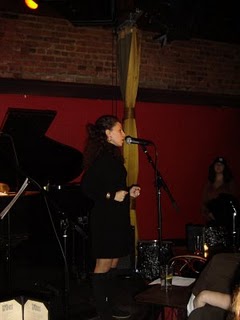 Next song of the evening was “Who Says Words,” another moving track from The Truth About Suffering with lyrics from a poem by Persian poet Rumi. About the song, Leonhart has said, “‘Who Says Words,’ is kind of a meditation about noticing your own ‘bad’ behavior but not doing anything to change it. There’s a passive struggle in it that I am very attracted to. I set the poem to a melody, and then sat down with Michael and constructed all the chord changes around it.”

The rest of the night involved strong covers of some of Leonhart’s favorite songs including, “Lucky To Be Me” originally written by Leonard Bernstein and performed by Blossom Dearie. Truly a stand-up number, I could picture myself at a jazz club while listening to Leonhart’s performance. With soft crescendos and her own take on older songs, Leonhart made each song her own, always with refreshingly unique style. 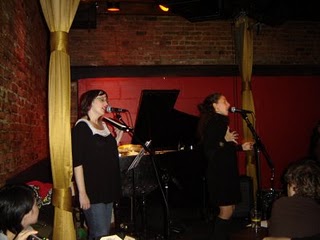 Deidre Rodman accompanied a few songs on vocals as well as melodica (a musical keyboard played by blowing air through a mouthpiece in the side of the instrument) — truly a sight to see. With many solid melodica interludes, Rodman wowed the crowd with her expertise on the instrument.

Song favorite of the night was definitely “Control Freak,” where many — if not all — in attendance sang along word for word during the chorus. With catchy lyrics, “I am a control freak/I want everything to be neat/And put it all in little boxes/I never will enjoy surprises/I just want control,” Leonhart had the song stuck in my head long after it the show was over.

For more on each artist, be sure to visit their Web sites for upcoming concerts and music.