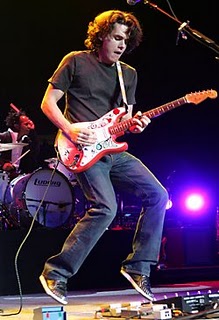 If you’re familiar with my music taste, you already know that I am a die-hard John Mayer fan. In fact, it’s one of those qualities that seems to be ingrained in my musical makeup and everyone knows about me. Even while interning at MTV News Online I’d get the occasional joke about my obsession with him. But, no matter what anyone thinks about Mayer as a person or his recent stints in all the gossip mags, his talent is undeniable. I wish I could play guitar even half as good as he can . . . but I probably should actually practice my guitar regularly to reach this goal. Below is my review of his Madison Square Garden concert from 2007. Feel free to read it below, or check it out on MTV here with a full photo archive of the show.

NEW YORK — With a guest appearance from Alicia Keys, sing-alongs galore and an intimate two-song acoustic performance on a small stage in the middle of the crowd, John Mayer’s sold-out performance Wednesday night delivered everything a headlining spot at Madison Square Garden should.

After a strong opening set from Mat Kearney, Mayer’s show began with the venue darkened before the sounds of Mayer’s guitar drowned out the screams from younger members of the audience. A blue spotlight revealed him as he began “Belief” solo before being joined by the rest of his band.

(See Mayer dazzle by checking out photos of the MSG show right here.)

As the 90-minute set (consisting primarily of songs from his latest LP, Continuum) progressed, he joked with the crowd often, introducing “I Don’t Trust Myself (With Loving You)” by saying, “In America, you’re allowed to be an a–hole.” While it seemed at first to be a political reference, he instead described a first date and surprised the crowd by saying, “This song is telling you I’m the type of person that will do you wrong.” With lyrics like “If my past is any sign of your future/ You should be warned before I let you inside,” Mayer got the point across.

The crowd went wild for songs like “Waiting on the World to Change” and “Stop This Train,” but longtime fans made their presence heard on older songs like “Bigger Than My Body,” “No Such Thing” and “Why Georgia.”

But even though Mayer, who won Best Male Pop Vocal Performance and Best Pop Vocal Album at the Grammys last month (see “Timberlake Rocks; Blige Weeps; Chicks, Chilis Clean Up At Grammys”), has a pop audience many would envy (need we mention Jessica Simpson?), the crowd at the Garden showed that his efforts to diversify musically have worked.

Sure, there were plenty of teeny-boppers in attendance, but there were also parents with their children, couples young and old, businesspeople coming from work, and high-school and college students. And Mayer made sure that his show contained something for everyone: His solos and improvisations with the two guitarists in his band pleased the guitar geeks, and he dipped into bluesy John Mayer Trio mode for “I Don’t Need No Doctor” and “I’m Gonna Find Another You.”

And throughout the show, Mayer constantly let those fans know just how much he appreciates them. “I’m not mature enough to be the kind of person to thank you for how much this means to me,” he said after “Waiting on the World to Change.” And then later, “This [success] doesn’t exist without you. I’m not sure I deserve it, but I’m going to keep writing and playing and doing whatever I have to do.”

Perhaps taking a tip from the Rolling Stones, for his encore Mayer performed two acoustic songs on a small stage set up in the middle of the venue, singing “Your Body Is a Wonderland” and “Stop This Train” just feet away from surprised fans, bringing the intimacy of a small club to the nearly 20,000-capacity venue.

Mayer left the small stage at around 10:30, but had one more trick up his sleeve. Returning to the main stage, he played “Vultures” — saying at the end, “This is the best night I’ve ever had” — before beginning his last song of the evening, “Gravity.”

As the song seemed to be ending, female vocals were heard — and just as cries of “Who is it?” became nearly as loud as the music, out came Alicia Keys, who took over the song’s vocals while Mayer accompanied her on his guitar. “Keep me where the light is,” she crooned, as the song ended with the spotlights shining brightly all over her and Mayer.

2 replies on “Blast From the Past: John Mayer Concert Review on MTV.com”

i went to that concert…this review really captures it perfectly

I went to this concert too! It was one of my top 2 shows last year, most def. You really did capture it well. Nice job.