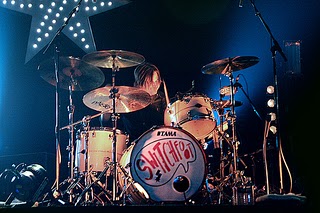 San Diego natives, Switchfoot, are about halfway into their “Appetite for Construction” tour, where $1 from every concert ticket goes to Habitat for Humanity. With a new album in the works for next year as well as a solo EP from singer Jon Foreman hitting shelves later this month, Switchfoot has been keeping busy. Drummer Chad Butler took some time out from the tour for a phone interview and talked to me about helping out on Habitat builds throughout the tour, being away from home while theCalifornia fires were raging, the recent split with record labelColumbia, and his favorite venue to play at. Catch them in concert at Hammerstein Ballroom this Saturday, Nov. 17 with Relient K and Ruth.

How is your tour going so far?
It’s excellent. It’s halfway over now and kind of a bittersweet thing to be thinking about the end of the tour. It’s been so great – the band, crew, a really great unity.

$1 from every ticket sold on the tour is going to Habitat for Humanity. What made you decide to choose this organization over another?
Several of the guys in our band had been involved in Habit builds inNew Orleans andKentucky. It’s an incredible organization nationwide, and has a chapter in almost every city. Our goal is to encourage people to donate time locally in their own city. We’ve gone out and built alongside people in the community. One of most amazing things about Habitat for Humanity is you don’t need to have any prior experience or expertise…they’ll put you to work and you make a difference. I’ve been really excited to see our audience to come down the sites.

I’ve seen you several times in concert and you always have so much energy. How do you keep up with each show every night after years of touring?
Gosh I wish I had some secret recipe for staying healthy! Really, for us the motivation is connecting with people. I think for so much of the importance we put on bands on stage, it’s a false reality. The hour we spend on stage is less important than the rest of the day and how we interact with people. To hang out with fans after the show and talk about life is one of the most important parts for me. In our live show there’s a conversation, it’s a two-way dialogue. To have the audience singing it back is amazing, to have people after each show come up and say how much a song means to them, that’s motivating. Our motto has always been “life is short, live it well.” It comes to have a significance. Each day that I wake up and get to play music that I love and get to travel the world with my best friends is great and I don’t take it for granted…each breath is a gift.

At first you guys were known more as a Christian-based band. After 6 albums you’ve greatly expanded your music and fan base. Was there a process at all or goal to grow out of being known more as a Christian band?
We’ve always been very up-front about what we believe and who we are. Faith is just as important to me now as it was 10 years ago. Only other people will call you what they will. For us it’s always been about making honest music. For me, I don’t see a significant change in who we are at all…I think hopefully there’s a broader, wider audience. I think it’s a wonderful thing to have more people listening to the music. For me it’s about thinking people. I think it’s to make honest music for thinking people.

Are there plans in the works for your next album?
Yes. We started this summer. By August we recorded 14 new songs.We’ve been recording on the road a little bit. When we get done with this tour we’re going into the studio and will be putting that out probably a year from now.

What kind of sound can fans expect with the new album?
I think we’re definitely experimenting. We’re in a mode of trying new sounds and so far it’s been really exciting. In the mean time we’re pretty excited. Jon’s finally getting to put out his solo acoustic EP’s. As a newly independent band we’re getting more of a creative outlet; being able to put out music whenever we want, and put our music out more directly to our audience whenever we could. Jon’s EP comes out later this month titled Fall.

You guys have your own record label now, right?
Yes, it’s called Lowercase People Records. It’s something we started as a vehicle to get our music out more directly to our audience. Jon also has a side-project with Sean Watkins from Nickel Creek, called The Real SeanJon. He’s working on putting that out early 2008. We’re just excited to finally hear some of these songs Jon’s been playing late at night at coffee shops down the street after our concerts. Those are finally getting the light of day. It’s an exciting time for us as a band. This is our first tour as independent band. We’re doing something much bigger than selling records. It’s playing music with the people you love and a much bigger cause than Switchfoot. We’re changing people’s lives around the country and the world.

You guys seem a lot happier since the break with Columbia Records.
It works best for us. We’re a band that likes to communicate directly with people one-on-one. We’ve always tried to break down audience and band. Taking out the middle man is a way to communicate more directly.

What does the writing process typically involve for the band?
Most of the songs start with Jon and an acoustic guitar and we build upon that – simple lyric and melody. It’ll expand and take place as we build it as a team. It’s a daily thing; we’re always working on music. Everyday in the dressing room. We’ve got computers and microphones and guitars. We’re always recording and working on new ideas. There’s a constant flow of music.

It must have been a rough time for you being on the road with the fires in San Diego. How did you deal with being on the road and away from home when all of that was going on?
It’s surreal to look at the streets where you grew up on CNN from the back of a tour bus. It’s very surreal. I’m really grateful that our families are okay. I really feel for the people that lost so much – homes and all of those memories. When it was happening you have that desire to help in some way. We felt we were helping in the best way we could – in light of the fact that this tour was about rebuilding and working in Habitat for Humanity. I’m sure Habitat will be helpful in aiding those families. It’s a reminder that you’re not guaranteed tomorrow. Those things that we hang on for sometimes, the things around us are meaningless in the scheme of life.

What’s a typical day like for you on tour?
On this tour, in a lot of ways, we’re doing tangible work. We’re able to go out to a job site, meet with familie
s that are working with Habitat and encourage local heroes -volunteers spending their hours helping their neighbors. This tour has been much more tangible and exciting to me than just talking about the band or our latest single. It feels like there’s much more of a human element for this tour, it feels really good.

I read that you’re planning on doing a tour for the troops in Iraq. Can you tell me a little more about it?
We’ve been trying to get over there for a while, being from San Diego and having Camp Pendleton being so close and people we’ve grown up with in the Middle East serving our country. Regardless of how you feel about the politics and the war, these are our friends and family. To give back in some small way will be a really exciting thing. We’ve been trying to coordinate that. It’s kind of a volatile situation there right now. If there’s a way to do that we’ll make it work.

Do you have a favorite song you love to play on tour?
Well, right now the new song, “Rebuild,” that’s been released on this tour is fun to play. “Rebuild” was written by Jon Foreman of Switchfoot and Matt from Relient K. The song is inspired by the idea that we’re a generation that has time to kill and put our hands to good use…it’s a song we’ve been playing every night at the show where all the bands come out to the stage and it’s a great part of the evening.

For the Switchfoot set, for me it’s a really exciting thing to be halfway around the world and have someone singing along. There’s a song “Dare You to Move,” that we wrote many years ago and it’s the highlight of the night. No matter where we go the audience is singing along. There’s a unity that exists inside a rock club that rarely exists anywhere else where you have strangers putting their arms around each other singing along. It’s a connection that I rarely see anywhere else. Music is a powerful thing. It brings people together.

Do you have a favorite venue to play at?
Soma in San Diego. That’s always a fun place to come back to, sort of homecoming whenever we get to play in San Diego. The club has lots of memories. I grew up going to rock shows there. When we play there it seems fitting, a natural you know, sort of full circle completion of a musical journey that started in San Diego and continues every time we come home.

What inspires your music?
For me, finding hope in dark places. We’ve had the opportunity to travel and see a lot of the world in the last few years. I’m still learning so much about the world and myself. Few experiences we’ve had in dark parts of the world…there was a trip to South Africa a couple years ago. Just seeing the light in the kids’ eyes and joy that they have surrounded by poverty and disease and they’re living in a way that I could only hope to in terms of real joy in the midst of pain. I feel we’re so sheltered here in the Western world. The more I travel the more I realize there’s hope. It has redefined what I view as hope…the experiences like that shape your world view. I’m very much a student still. Music has always been asking questions, talking about things in a song we’re not comfortable talking about in other situations. Songs are vehicles of exploring the world. I grew up listening to Bob Dylan and Johnny Cash. They’re not afraid to wear their heart on their sleeves and talk about things no one else is talking about. With music you can talk about things that are taboo and have deeper conversations, dialogue that you wouldn’t in everyday life. For me, music is a very powerful thing.

THat’s amazing! Thanks for posting!