Special thanks to Wendy Hu for the amazing concert photos! All credit goes to her. Feel free to click the link above to read the review on mtv.com. 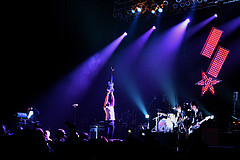 Minutes before 10 p.m. Hammerstein Ballroom went dark and the sound of guitar chords from radio hit, “Meant to Live” could be heard on stage. Screams echoed throughout the room. The spotlights came on and Switchfoot quickly began playing “Oh! Gravity” – first single off of their sixth album of the same name. The energy was high, both on and off the stage as each new song was played. “Stars” was their second song of the night and after that was one crowd favorite, “This is Your Life,” as singer Jon Foreman sang at the edge of the stage, leaning into the crowd. 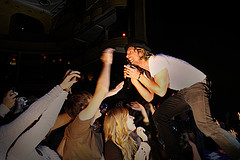 Having been to three Switchfoot shows in the past three years, I’ve always wondered how they keep up their energy for every night of the tour. Drummer Chad Butler explained that the motivation is connecting with the audience.

“In our live show there’s a conversation, it’s a two-way dialogue. To have the audience singing it back is amazing. To have people after each show come up and say how much a song means to them, that’s motivating,” said. And the audience was singing along all night.

Switchfoot kept the show fresh with a few remixes of old hits throughout their set. One song in particular “Gone,” started out with band members singing a Beyonce song and then intertwining Rihanna’s “Umbrella.”

Having recently broken from record label , Jon Foreman announced that this is Switchfoot’s first show in as an independent band.

While singing “American Dream,” the entire band paused, for which seemed like eternity, frozen in their spots, seemingly making the point that a house with a white, picket fence and 2.5 kids is not, in fact, their American dream.

Singer Jon Foreman has the most energy of any performer I’ve come across. During “Dirty Second Hands,” he played a symbol, spinning around in circles while hitting it. Slowing down the night a bit, when playing “On Fire,” Jon jumped into the crowd and started singing to the audience, while balancing on the first level railing of box seats adjacent to the stage. Later, during hit single, “Meant to Live,” he crowd-surfed into the audience for a while, the crowd later gracefully placing him back on the stage. 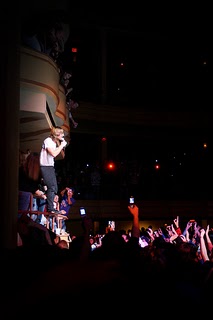 The highlight of the evening occurred when all three bands took the stage to perform a song entitled, “Rebuild.” Jon Foreman of Switchfoot and Matt Thiessen of Relient K wrote “Rebuild” and released it specifically for their “Appetite for Construction Tour” where $1 from every ticket is going to benefit Habitat for Humanity. Fans can go onto Switchfoot.com and purchase the song, thus directly donating money to Habitat for Humanity. The tour has raised over $67,000 for Habitat, all three bands helping out on builds throughout the tour. 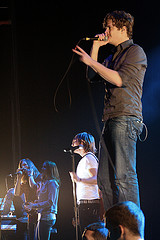 “Our goal is to encourage people to donate time locally in their own city. One of the most amazing things about Habitat is you don’t need to have any prior experience or expertise . . . they’ll put you to work and you make a difference. I’ve been really excited to see our audience come down to the sites and help out,” said.

Matt Thiessen of Relient K agrees. “One of the best things of this tour is the meaning behind it,” he told the audience. “One dollar of every ticket goes to Habitat for Humanity. We want to encourage everyone to check out their local chapters and go to some sites. It’s a lot easier than you think. We’re never completely content with where we are in life. We need to be compassionate. Being compassionate is what makes us feel alive.”

The rest of the Switchfoot set was strong. Jon played an acoustic number with special guest, Keith Tutt on cello, for the infamous crowd favorites, “Only Hope,” and the beginning of “Dare You to Move,” until the rest of the band came out, resulting in the entire Ballroom singing along to the last song while Jon thanked everyone for being a part of the last 10 years. 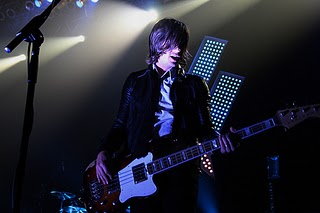 said “Dare You to Move,” is one of his favorite songs to play live. It’s one of the songs that they play halfway around the world and the audience sings along to every word. “We wrote it many years ago and it’s the highlight of the night. No matter where we go the audience is singing along. There’s a unity that exists inside a rock club that rarely exists anywhere else where you have strangers putting their arms around each other singing along. It’s a connection that I rarely see anywhere else. Music is a powerful thing. It brings people together.”

Both Relient K and Ruth had strong sets. Relient K played some new songs from their latest album, “Five Score and Seven Years Ago,” as well as surprised the crowd with their holiday version of “Sleigh ride,” from their holiday album, cleverly titled, “Let It Snow Baby…Let It Reindeer.” With fake snow falling from the lights and an inflatable snowman, Christmas tree, and polar bear, Relient K got the Ballroom into the holiday spirit.

Like Switchfoot, Relient K played an hour set showcasing hit singles, “Be My Escape,” and “Who I Am Hates Who I’ve Been.” They even covered 80s Tears for Fears hit, “Head Over Heels” with remarkable precis
ion, as well as wrote a “love song” dedicated to hit TV show, “The Office.”

One of the highlights of Relient K’s set was when
they hand-picked three members of the audience to help them out on a song. One boy played a few guitar chords for the song while two girls helped out on tambourines.

Opening act Ruth performed for their first time in . They had a strong 20 minute set. Hailing from , they played a song entitled, “Here in ,” and you could see their excitement throughout their performance to be playing in the city that never sleeps. Lead singer Dustin Ruth told the crowd how stoked he was to be on tour with Switchfoot and Relient K, explaining how surreal it is for Ruth to be on tour with their heroes.

Although the concert ended at 11 p.m., Jon had a special treat for fans waiting outside in the cold well past midnight. He took out his guitar and gave 30 or so fans an impromptu performance of songs “24” and “Somebody’s Baby,” which will be featured on his “Winter” EP. Jon and the rest of the guys from Switchfoot were on signing autographs and taking pictures until 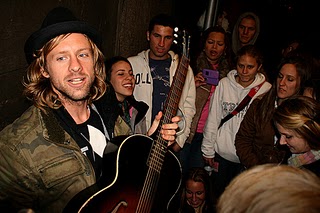 4 replies on “Switchfoot, Relient K and Ruth Raise Over $67,000 on Tour Benefiting Habitat for Humanity”

Awesome annie! I loved it!!! Very accurate to the show and the feeling it gave viewers! I’ll be printing it and showing it to people 🙂

Fantastic! You’re such a superstar 🙂 Awesome pictures too!