Saturday night Mainstage in Pompton Lakes, New Jersey, was the scene of a dual launch party – Ded Clothing and Break-In Records. Five local Jersey bands provided entertainment for the night, including a first-time performance from Delta Falling, as well as Dan Maxwell & His Band, The Rose Riot, Vampire for Hire, and Crash Romeo. Whether you’re a fan of punk rock and mosh pits or slower indie music, there was something for everyone.

Delta Falling started out the night with an incredibly energetic stage presence. Possibly the crowd favorite, it was hard to believe this was the band’s first performance. Ded Clothing founder and bass player of Delta Falling, Ian Caravela, thanked the crowd for coming to the launch event saying, “I’ve dreamed of having my own clothing company for years,” while continuing to thank friend Dane for helping with designing the clothing. Those who purchased clothing at the concert can go to Dedclothing.com once the site launches to decipher hidden messages from the merchandise bought. Here are Dane and Ian showing off Ded Clothing.

Delta Falling is made up of ex-members of Veronica and Chris Batten and the Woods. I love to see bands that have a great stage presence, and this band is definitely one of them. Whether it’s one of the guitarists jumping around stage or the singer reaching into the crowd, Delta Falling sure knows how to put on a show. The band has a strong guitar sound and while this was only their first concert, it will be interesting to see what the future holds for them.

Dan Maxwell & His Band was the second act to perform for the night. And, while they were a bit more subdued than Delta Falling, they are very talented performers. Despite being only a three-piece band, they had a strong sound and singer Dan Maxwell showed off his vocals while the guitarist and drummer accentuated his singing very well throughout the performance. According to their MySpace page, Dan Maxwell & His Band place more into the indie/rock/country genre combination, which is an interesting compilation, but suits them well as a band. 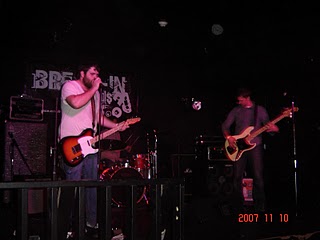 The last three bands – The Rose Riot, Vampire for Hire, and Crash Romeo had more of a punk rock feel to them, all three having incredible energy. Lead singer of The Rose Riot kept jumping into the crowd while singing during the last few songs and dancing with some of the girls near the front of the stage. 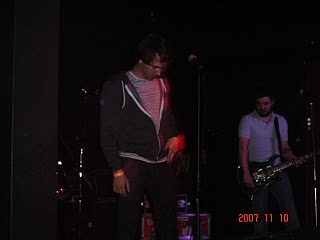 Vampire for Hire’s goal for the night was to get the crowd dancing. And they somewhat succeeded. Before playing “Shut Up and Dance,” the band joked with the audience saying, “If you don’t dance then you don’t like America.” Lead singer Brent Carpentier continuously jumped into the crowd singing and dancing throughout their set. 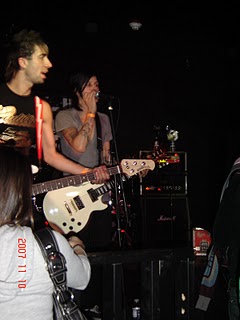 Crash Romeo falls more into the pop-punk genre. They just finished up their second album, which is expected to be released in March. Having been in the studio the past few months, Crash Romeo featured some of its older music as well as a few new songs. They had the audience clapping along during most of their set, some people in the crowd even attempted to start a mosh pit, dancing around towards the end of their set. 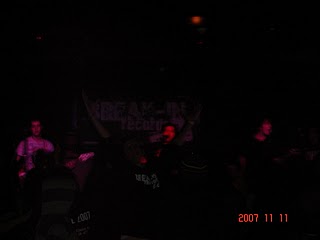 I talked with Danny Goldberg and Brian Luciano, founders of Break-In Records, after the show about their thought process in starting a record label and their hopes for the future.

What was the process you took in starting a label?
Danny: Basically Brian and I met through a band that I was managing. I had mentioned my interest in starting a label and they suggested that I meet up with Brian. From the beginning him and I clicked, so a partnership seemed natural.

What were your reasons behind starting Break-In Records?
Danny: I have been working in the music business for many years now, and I basically got sick of what was going on around me. Labels and the media industry were taking the art out of what is creative expression and as the labels and businesses behind them were thriving, the artists were starving. After going on tour as a tour manager with Halifax, it really opened my eyes and I swore when I got back that I would never work for anyone but myself ever again and Brian shared the same mentality.

What are your hopes for Break-In Records?
Danny: Our hopes are obviously to be a successful record label and to branch out to other media. Be more than just music. Our forte is music, so that is what we started with and that is what we plan to build our reputation on. Basically, not to be another company that everyone forgets about.

Brian: We want to do things differently. We’re about shock value.

What types of bands are you planning on signing?
Brian: Right now we’re working on the rock scene. This kind of genre. We’re open to anything. That’s the problem most
labels have – especially new labels – they’re too one-dimensional and that’s why they don’t go very far. You have to be able to diversify yourself. Anybody with pure talent is what we’re looking for. This scen
e now is our way of building ourselves into the industry. You gotta start somewhere. If you try and go too big too fast you always fail, so you gotta start small.

What makes Break-In Records stand out from the other labels?
Danny: With my vast experience in the music world and Brian’s incredible business savvy and business experience, we don’t see how we can fail. The one thing that we pride ourselves on is motivation and to not just be another faceless indie label.