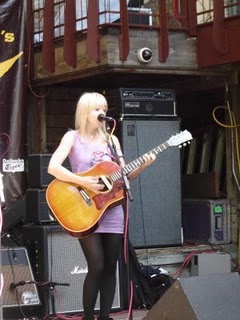 I woke up early Friday to head to Cedar Street Courtyard for my interview with Anya Marina. Before her set, Anya talked to me about the inspiration behind some of her songs, her recording process (which involved recording one song topless to get the right vocals for the song) and overcoming people’s expectations of her not making it in the music scene. I’ll be posting the full Q&A; in the upcoming days, so check back for that.

Anya’s performance was nothing short of enjoyable. The California native had all in attendance laughing along to her stories about eating goat milk yogurt for breakfast, quitting her job to be a musician, and visits to her therapist. Highlight of the set was stand-out single “Move You” and her acoustic cover of T.I.’s “Whatever You Like.” 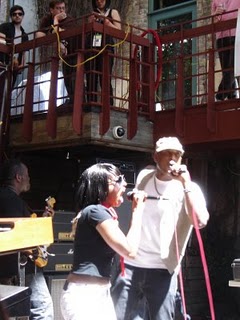 Next band up for Filter Magazine‘s showcase was the phenomenal Idle Warship. Truly a must-see the band, consisting of Talib Kweli, Res, and Graph Nobel among others, Idle Warship had every hand in the courtyard raised in the air during their energetic set. The Brooklyn/Philly/Toronto members had the crowd rocking so hard at one in the afternoon, you would have thought it was 1 a.m. on a Saturday night. Highly recommend catching them if you get the chance as their impeccable blend of rock, R&B; and rap is impressive. 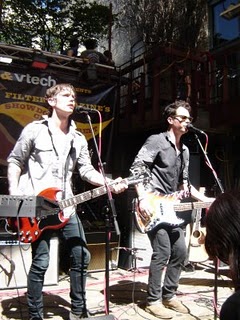 While Idle Warship was a hard act to follow, New Hampshire-based Wild Light held their own introducing some indie music to the crowd. Wild Light definitely had the indie diehards support in the audience while performing in the scorching Austin sun. 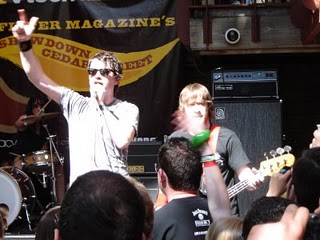 Next band I caught at the Filter showcase was Manchester band The Whips and boy did they have the crowd’s attention. From the energetic fans surrounding me (most likely from Manchester), I felt like I was at a dance party with their computer generated electronica and strong bass and drum beats. Everyone around me was jumping with their fists pumping in the air. I headed out after their set, but still have their single, “Trash” stuck in my head.

Headed to catch Fanfarlo with the roomies after some much desired (and delicious) ice cream on 6th Street. Every indie music lover’s band, Fanfarlo switched up the typical expected showcase with a variety of instruments — from clarinet to violin — they represented indie music at it’s best at Emo’s Annex Friday afternoon. 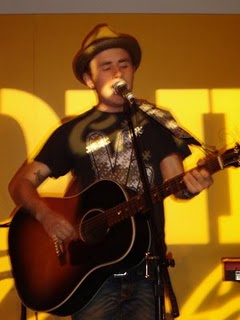 My favorite performance of the night goes to Jason Reeves. Playing at Live.Create. Lounge as part of VH1’s Save the Music showcase, he impressed the audience with his heartfelt stories and adamant view on the importance of music in schools. Playing tracks off his most recent album, The Magnificent Adventures of Heartache (and other frightening tales), it is evident that he is a hopeful romantic as many of his tracks deal with relationships.

Before introducing “Someone, Somewhere” Reeves told the crowd the song is about “being in love and being hopeful when everyone is telling you it’s not going to happen. We have to fight and stand up for that.” With his hushed singing style towards the fade out of the track, you could sense the emotion in every song played throughout his set.

About VH1’s Save the Music campaign, Reeves said, “What’s happening in this building is so powerful. I believe music changes lives. It’s one of the only truly beautiful things we have left as human beings. This is not letting music die. Please do everything you can to save music, otherwise we’re all going to die.”

The rest of the night was a bit of a blur as plans kept changing once realizing I couldn’t catch a few bands I hoped to see (Lights Resolve, Tinted Windows, Lady Sovereign) but all wasn’t lost. I caught part of Solange‘s set at the Convention Center. Dressed to the nine, seeing Solange and her band perform had that New York City lounge feel as the lighting and dance contribution by her and her backup singers was stellar. How she dances in those heels I’ll never know, but she wowed the crowd with songs off her recent release. You can catch her set live on Direct TV so be sure to check your cable listings to be part of SXSW. 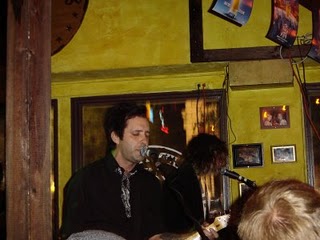 I was dying to catch Luna Halo‘s showcase after seeing them open for Switchfoot over a year ago. By far the best opening band I have ever witnessed, their blend of indie rock is impressive and their performance last night was nothing less than stellar.

Perhaps the most interesting venue to catch a show had to be Lisa Hannigan‘s set at 11 p.m. at the Central Presbyterian Church on 8th Street. While she’s no doubt an impressive talent, the dimmed lighting and laid-back vibe definitely was soporific and after catching a few songs I headed back to 6th Street to catch Nashville-based band Shirock (see below). 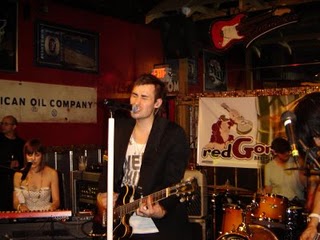 What Shirock has been doing in relation to promoting their debut album, Everything Burns is inspiring. The band has launched a non-profit organization called Everything Burns as a way to encourage and enable people to help those in need by providing awareness of various charities throughout their tours. The idea behind Everything Burns is “not to get stuck in the mundane,” said frontman Chuck. “Engaging in culture and getting involved [is what’s important]” he continued. Truly a stand-up example to all musicians, I’m interested to see where Shirock will be in a few years.

Wow, totally didn’t realize I caught 10 shows until I finished writing this post! Definitely the place to be for the music addict, SXSW obviously has the most versatile line-up you’ll see anywhere. Didn’t catch Metallica or The Decemberists unfortunately but the rest of the festival looks promising as I’ll be seeing Third Eye Blind‘s performance tonight at Stubb’s! Keep reading for updates throughout the rest of the weekend and into next week!

P.S. Hopefully I won’t be losing all respect from you readers, but one of the highlights of the night had to be running into Chris Kirkpatrick from ‘N Sync right off 6th Street. My inner 13-year-old obsessed boy band fan came out and I’m still regretting not taking a picture with him. I know, I’m a music journalist and gotta be professional but ‘N Sync! Takes me back. Cue “Tearin’ Up My Heart” . . .