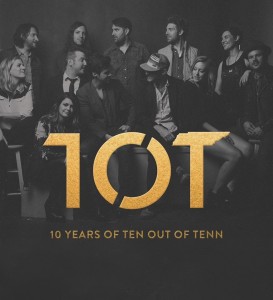 I first learned about 10 Out of Tenn seven years ago while researching for an interview with Matthew Perryman Jones, a Nashville-based singer-songwriter. Part of a collective of songwriters based in Tennessee, he told me of his decision to move from Atlanta to Nashville and how close-knit the songwriting community was in Nashville. I’d come to realize that years later after countless trips to Music City for work and fun, convincing myself more and more each time that it’s a city I need to live in.

During my recent trip there for Country Radio Seminar, I spent some time with singer-songwriter-producer Trent Dabbs, the founder of the 10 Out of Tenn tour concept and compilation albums and Amy Stroup, also a songwriter and one-half of the duo with Dabbs, Sugar & the Hi-Lows. They told me all about how 10 Out of Tenn formed and this Friday, April 24 the songwriter’s collective celebrates 10 years together with a performance at Nashville’s Ryman Auditorium. You can purchase tickets here.

“It came about really when my wife and I were driving back from a road trip in Jackson, Mississippi and I was listening to all these different local albums and realized that all these people were so good and some of my favorites,” Trent explains. “They were all local so it morphed into the idea, ‘What if we put them all on a compilation and let everyone know that it’s not just gospel and country music here?’ I like to rate things out of 10 so I came up with the quirky name.”

He explains that during the first tour the idea of having everyone play on each other’s songs wasn’t completely dialed in and the tour included two bands and four solo artists. The next tour consisted of more solo artists and everyone played on one another’s songs. Trent admits that he didn’t have high expectations the first year and never imagined that 10 years later they’d be celebrating such a big milestone.

“I think what made the beauty of the whole concept work was not having high expectations,” he says with a laugh. “We were just excited to tour with people that we love. The camaraderie of those people in the community that was present the whole tour just made it that much more special.”

Amy Stroup is the newest member of the collective and recalls first seeing a Ten Out of Tenn show while she was in college.

“I remember seeing it and thinking, ‘Oh, wow there’s a different possibility in Nashville of how you can do music. It’s not just country or gospel. There’s a really unique independent movement,'” she recalls. “I was 100% inspired by it. Trent and I were co-writing, we started co-writing a couple years before I was a part of 10 out of Tenn so I was very familiar with Trent and Kristen and the work that they were doing for artists and trying to create a different genre for Nashville to be known for, a collective idea.”

Amy says Ten Out of Tenn gave many musicians, including herself, the ability to stay in Nashville and make music as well as collaborate and work on each other’s records.

“We were lucky that it was all natural relationships. I don’t think if you just cherry picked a bunch of artists that it would work, if at all,” Trent adds. “I think the sincerity of it made it what it was.”

Amy explains that there isn’t a Ten Out of Tenn tryout, and instead the artists collaborate rather organically, many having written together in the past or sang on each other’s records. “We’re already working with these people, we already love them. Why don’t we tour together? There’s enough of us already naturally working together and cheering each other on,” she says.

Matthew Perryman Jones shared the same beliefs seven years ago when I asked him how the Nashville music scene stands out from the rest of the country.

“You think of Nashville and you think of Music City. Most people just think of country music. When I first moved here, there was this really cool, underground group of artists and songwriters that were amazing and inspiring. This town, even in the last three years, has just beefed up its artist roster.

“People are moving here from other cities, even from New York and L.A. because the music scene definitely has more of a communal sense to it, people really support each other. In a way, I guess it’s different from other cities in that there’s definitely more of a concentration of artists here and the community is definitely really big and supportive. Not to say it doesn’t exist in other cities, I’m sure it does, but I think it’s a little more prevalent here. I think it’s helped me too, in a sense, because it’s a really inspiring city to live in.” 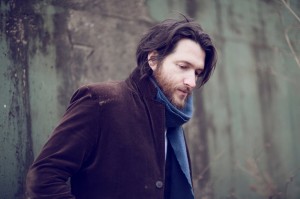 I first witnessed Matthew Perryman Jones live in 2008 and was blown away by his songwriting talent and striking vocals. Performing tracks off his release, Swallow the Sea, including hit “Save You,” Jones impressed a packed room at New York’s The Living Room.

Since then, the Nashville musician has released three solo albums, co-written standout tracks for artists including Mat Kearney and Zach Williams, as well as traveled the country with Ten out of Tenn, a group of musicians from Tennessee. Not to mention, many of his songs have been featured on television dramas like “Grey’s Anatomy.”

Jones has garnered comparisons to U2 with his thoughtful lyrics and powerful singing style. With a new album in the works,  Jones will no doubt continue to leave a lasting impression on his listeners.

Songs like the beautiful “Until the Last Falling Star” off The Distance In Between strike a chord with soaring string features and Jones’ poignant vocals. With delicate strokes of the piano next to light percussion features, never overpowering the emotional tale within the song, it is the perfect musical blend.

Last year, Jones released Until the Dawn Appears, an impressive compilation of new versions of some of his most acclaimed works in addition to two new songs never before released. While the more stripped down and haunting take of previous hit “Save You” captivates with string and piano interludes, others such as “Waiting On the Light to Change” leaves its mark with hand snapped rhythms and Jones’ wavering vocals. 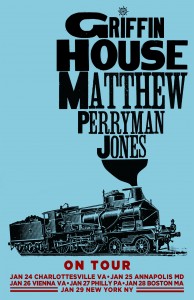 For more on Matthew Perryman Jones, be sure to visit his Website and catch him on tour in January with Griffin House (flier above). Download “Looking For You Again,” co-written with Williams and featured on “Grey’s Anatomy” here. 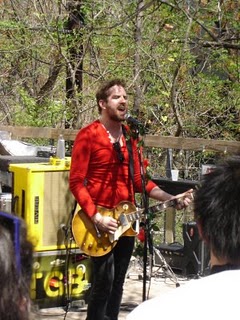 South by Southwest is every music lover’s dream. On 6th Street alone the venues line up one after the other (and that’s only one street!). You can catch a pop band at one venue and right across the street there’s a hard rock band from South Africa playing.

You’ll be happy to know that this afternoon I successfully purchased a wristband thanks to my Twitter badge holder friend @CyndiHellen. In order to get a wristband you have to be with a badge holder and buy it off them. Weird, I know but that’s one thing accomplished and now I can get into any concert I want!

My roommates are great too! Two of them have been attending SXSW the past four years so they know all the secret spots first time festivalgoers aren’t aware of. For instance, there’s a 75 cent “airport flyer” bus from the airport to downtown Austin which saved me tons of $$$ on a cab. They also found a great taco place for lunch today, cleverly titled Taco Shack. Fellow Jersey girls (they actually live two towns next to me) I really lucked out on having some pretty awesome roommates to spend the week with.

I’m about to head out to catch Meiko’s performance at the Austin Convention Center and interview her afterwards, but here’s my tentative schedule from today. Be on the lookout for more interviews and live Twitter updates.

2 p.m. – waited in line and purchased my wristband

Still trying to figure out if I can make it past 1 a.m. stay tuned for my interview with Jason Reeves and his take on SXSW tomorrow!

You can also read this post on MarieClaire.com here.