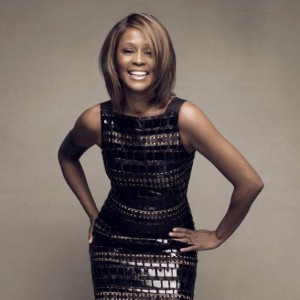 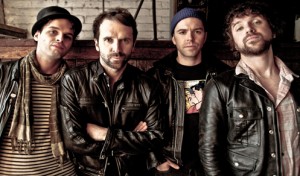 Over the summer, I caught up with Canadian-based rock band The Trews after an intimate performance in Brooklyn. “I find playing in the living room more nerve-racking than playing in front of 30,000 people,” frontman Colin MacDonald admitted after their set. “Playing in front of 25 people in a living room, you can really feel the eyes on you.”

After their set, the band filled me in on their songwriting process, what it’s like performing to American audiences and learning from the bands they tour with like Kid Rock and Robert Plant. Be sure to catch them tomorrow at Mercury Lounge. For complete tour dates, visit their Web site.

Their fourth album, the standout Hope and Ruin, is a departure from previous studio albums as the band wrote and performed everything live. A more organic process, The Trews spent time recording at The Tragically Hip’s Bathouse Recording Studio. Located on the shores of Lake Ontario between Toronto and Montreal, the band lived in and wrote the album at the converted mansion.

“We were just trying to catch lightning in a bottle, just playing until it felt right,” MacDonald said. “Bathouse has a tree house kind of vibe, it’s a good hang. It has a pool table, record collection, woods in the backyard, lake in the front yard. It’s a really cool place to focus for a band, to get out to the country and really focus on the task at hand. It’s really informal. We’ve recorded records at places that have felt a lot more clinical.”

For this record, the band went into the studio for the first time without songs completely finished. “The Dreaming Man” was written over coffee with their producer after jamming on a D riff.

“We had a great little melody and great little jam and I found some lyrics for it from some other song I had. It was done that night and recorded,” MacDonald said.

“Sometimes songs are more fully formed upon delivery than other ones. For the most part, we want to have music that you feel something from,” explained MacDonald ‘s brother, John-Angus. “I don’t think the lyrics have ever come first for us. It’s mostly just a feel, melody, groove or riff and we either shoehorn or Colin comes in with lyrics that are more fully finished than others. Lyrics can be painful. If you don’t get them right away, it could take a while.”

Colin went on to explain that songs often come from what the title dictates.

“A song like ‘Hope and Ruin,’ came from a magazine cover somewhere. I saw hope and ruin and thought it had a nice ring to it, ‘I’m going to sing that over this song. What does hope and ruin mean to me?’ It’s as simple as that. If a song comes in 15 minutes chances are you have a pretty good song on your hands. Sometimes I write from personal experience, sometimes I write from other people’s perspectives and make it sound personal. It’s not always just about me.”

In fact, often the songs fans most relate to are not about him.

“If you can write a song form someone else’s perspective and still feel it, that’s important. You can’t just keep wining about your own situation over again. You have to broaden your emotional pallet,” he said. “Sometimes you write a song that predicts your future, which is weird. Maybe it’s a self fulfilling prophecy. You write this great breakup tune and you’ve broken up four months later. I don’t know what that means, maybe it’s you asking for it. From time to time, a songwriter can tap into something that has yet to happen to him or her.”

Having toured with everyone from the Rolling Stones and Robert Plant to Kid Rock and Nickelback, The Trews say they learn something from each act they perform with.

“As soon as I’ve done my set, I’ll go grab a beer, park myself side stage and watch the entire set of the bands we’re playing with,” MacDonald said. “We just got off tour with Kid Rock and that guy is one of the greatest rock performers out there right now. I watched his set every night and he was incredible. We opened for Robert Plant a few years back. It’s incredible. It’s always a thrill to open for bands you admire.”

Having been called “the greatest rock band of their generation,” The Trews continue to expand their fan base in the United States and Australia. While performing throughout various cities in Canada always feels like home, the band admits there is something special about U.S. audiences

“This is taking nothing away from our Canadian fans, but there is a real sense of diehard devotion that we get from the fans that we gathered here from the States,” MacDonald said. “It’s there in Canada too, but I guess I’m more struck by it because the numbers are generally smaller. To see them follow us from city to city in these small clubs that we’re doing in the States just emphasizes how much they really do believe in it. That’s cool because we’re not as well known down here. Americans, if they decide they like you, they’re lifers.”

With the goal always in mind to make music they want to listen to, The Trews continue to grow their fan base worldwide.

“It’s an ongoing process,” MacDonald explained. “We’re always trying to make the best possible music that we can make. If it’s something that I want to put on when I’m hanging out at home, then I’ve succeeded.”

Maybe it’s because it has Lynyrd Skynyrd’s “Sweet Home Alabama” featured throughout the song, or it could be the light piano and guitar playing in the background. But I can’t deny it, Kid Rock’s “All Summer Long” is such a catchy song. It’s just one of those perfect summer songs that take you back in time. Listen to it and see for yourself.