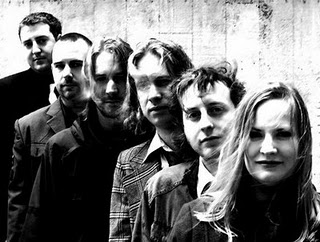 Last year, during SXSW I had the privilege of interviewing Southampton, England-based sextet Dlugokecki during their first trip to the States. Having been in the music scene the past 10 years, the band is inviting fans to add their picture in the inside of their upcoming release, 10 Years of Dlugokecki.

The 2-Disc, 34 track album will be available April 5 and all you have to do to enter is hold up a piece of paper with the name of your favorite Dlugokecki song clearly written. The most original entry wins an A2 framed 10 Years of Dlugokecki print of the new artwork, signed by the band. Three runners-up will be picked at random and win free tickets to the tour finale and a free Dlugokecki T-Shirt.

Send a picture of yourself,  friend or family member and they’ll print it in the inside of the CD and add it their Web site. Add the picture to facebook and tag Ben Dlugokecki, or send him the image via E-mail. The contest ends Sunday, so be sure to enter now! I may send a photo myself…

Their first trip to the States, Southampton, England-based sextet Dlugokecki gave Americans a taste of what’s to come on their recent performances in New York and Austin, Texas. While they realize their band name isn’t the easiest to pronounce (Der-loo-go-ken-ski), they’re hoping the music will speak for itself. With their debut album, Let This Be Right, released in March and a tour on the way, the band has no plans of slowing down.

Dlugokecki filled me in on their music, to which they refer jokingly as “rocky poppy” as well as discussed why they’re President Obama’s favorite band, among many tangents, which is only a glimpse into just how fun this band is to be around. While they explain they’re the least rock and roll band in the world, “We drink tea and have biscuits,” keyboardist Andy Wild said. “There are no televisions thrown out of windows,” Dlugokecki are truly a band worth checking out. Read on for plenty of laughs from the band who will prove to be the difficult name on everyone’s lips in no time.

How did Dlugokecki come together?
Ben: Well, I was a singer-songwriter on my own. Writing songs and singing into a mirror and hoping one day I’d be famous and have lots of women screaming. That wasn’t working out for me because I wasn’t a very good guitarist and didn’t have much confidence. But then I met Andy and we formed the Dlugokecki band. There was a lot of synergy and it all came together. Then we created the Dlugokecki sound, which is a bit rocky poppy. [Laughs].

Andy: On the plane, we hadn’t slept for a long, long time and someone was asking what style of music we were playing. It’s always so difficult to say, “Oh it’s that style or that style” and for some reason I said rocky poppy, which is rubbish. We did another interview today and I said we are rocky poppy and he took it completely seriously and was like, “So what’s rocky poppy?”

Ben: So now we’re our own genre, rocky poppy. We’ll be on iTunes. You know how they have all the different genres? Rocky poppy, there’s just one.

Boyd: Right in between rock and pop. And then someone will come up with poppy rocky.

Ben: Oh, I don’t like that. They’re scumbags. Sorry, we digress. So, yeah, the band formed in Southampton and we’ve just seemed to have lots of luck. It seems like every year something happens and it just gets bigger and bigger. Now we’re in Austin, Texas playing with The Proclaimers. It’s a bit of a dream.

Ben: We were in a limo two days ago riding around New York. Times Square. Just loving it.

Andy: We did pay for it, though.

Ben: No, it was paid for by Barack Obama. He knew we were coming. He thought, you know; smooth over relations with the British. If you can get in the interview somewhere that we are Barack Obama’s favorite band that might go down well. [Laugher].

Boyd: Let’s not do politics.

Ben: No, okay. Let’s keep out of politics. But Barack Obama rocks. We think he’s brilliant. We need a Barack Obama.

Is this your first time in the U.S.?
Ben: Yes. This is the beginning of our assault on America. We are going to take it by storm, bit by bit, state by state.

Aidan: This is the calm before the storm.

Ben: I like that. This is the calm before the storm. This is our relaxed, “Ahhh, there’s Dlugokecki. What’s that all about?” Then we come back and they’re like, “Wow, look at them. They’ve got a really weird name. And they’re Barack Obama’s favorite band allegedly.”

Why should we see you in concert?
Ben: We write positive love songs, which not many people do anymore. It’s very negative. A lot of the music around is, “You broke my heart, you stole my cat,” that sort of stuff. [Band laughs]. Well, maybe not cat. Maybe car or corn. We tend to write nice things of love and why it brings us all together. And every now and then throw in one that does rip your heart out.

Aidan: And cause tears.

Andy: They were tears of joy.

Ben: No, they weren’t tears of joy. We want people to hear us. Every band wants people to hear them. We think we have something else. We write real songs, little bits of poetry. Come hear the difficult name on everyone’s lips. We should put that in fliers. That’s an idea.

What’s different from American music and the scene in England?
Aidan: The audiences are different.

Andy: The audiences out here have been amazing. Like, in there today they were so quiet. They were very respectful. Back home you have people chatting away. Sometimes you’ll have it complete silent. Really, really nice audiences that listen and think about what we’re trying to put out there.

Boyd: They want to hear the stories behind the songs. They want to know what it’s all about and Ben’s very good about telling people what they’re all about.

Ben: It’s all about the music really. All of us are big musicians, we love music. We are one band, but we’re also loads of different bands. The guys in Dlugokecki are in their own other bands as well. We live music. If I’m at home and I’ve got a spare minute I’m writing lyrics on the wall. I’m writing all the time. Instead of cooking the fried eggs or washing up, it’s all about the lyrics.

Would you rather someone hears you first live or on iTunes?
Andy: To be honest with you, I don’t think I would mind just as long as people are listening.

Ben: The best thing is when you’ve moved someone. They’re affected by the song. If someone says, “Your music’s good” and you go, “Which song do you like?” and they say “Ah, all of them,” you know they’ve got the CD and they’ve put it in the fridge. [Band laughs]. But then if they say, “
This song really touched me or really moved me in some way” that really gets you. I quite like it when someone sees you live and they get the CD and then they come back again and again.

Boyd: It’s always good when somebody sees you live, gets the CD, plays that to a friend, the friend likes it and then they see you and they’re blown away. For me, that’s better than a CD. There’s nothing worse than seeing a band that are amazing and then getting the CD and it’s like “Ehhh.” Either way, you’ve got to work at. You’ve got to knock them dead both times.

What is your ultimate goal as musicians?
Ben: I don’t think we’re dreaming of much. All we want to do is change everybody in the world’s lives forever. [Band laughs]. I know that sounds like a bit of a challenge, but if you don’t set your sights that high, you’re going to flounder in the sea like a stone skimming across the waters. We’re not just a stone. We’re a rocket flying to space.

Boyd: Space is the limit.

Ben: I’ve got another goal: First band on the moon. To be honest, no one has ever done it. Lazy, lazy, lazy. Yeah, first band in space and change everyone’s lives forever.

You can also read this interview posted on MarieClaire.com here. Watch the video for “Save My Soul,” Dlugokecki’s first single off album Let This Be Right. For more on the band, be sure to visit them on MySpace. 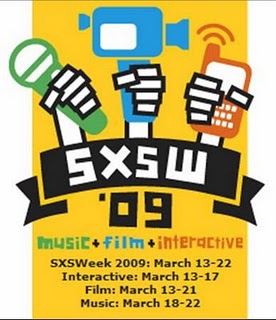 Yesterday went much faster than I had wished. As the saying goes, all good things must come to an end and Saturday was definitely bittersweet. As much as I didn’t want to leave Texas and the music heaven that is SXSW, I really don’t think my body could have lasted another day of 10+ shows and endless interviews.

By Saturday I was feeling the stress of too much sun, standing endless hours for multiple shows a day and lack of sleep, but I didn’t mind because I knew I’d be catching Third Eye Blind later that night. What better way to end SXSW then a 70-minute set by 3eb?

I barely made it up by 1 p.m. yesterday and spent the rest of the afternoon preparing for two interviews later that night. At 6 p.m. it was time to head over to Stubb’s to catch Virginia-based band Parachute. With infectious pop melodies and heartfelt lyrics, the five-piece band have been making a splash in the Virginia music scene and it’s only a matter of time until they’ll be in heavy radio rotation. With a mix of pop rock gems and jazzier saxophone-infused songs, comparisons include Maroon 5 and an older, more mature Jonas Brothers. In fact, the band has played with the Jo Bros., most recently in Times Square for New Year’s Eve. 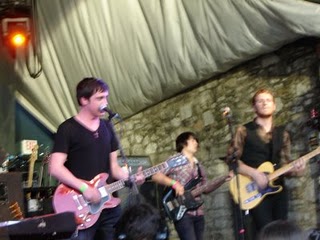 Having their song “She Is Love” featured in a Nivia commercial and their debut full-length album due out later this year, Parachute is a band to definitely keep on your radar.

White Lies was up next at Stubb’s and wowed the crowd with their atmospheric rock and heart thumping bass and percussion beats. A band on most festivalgoers’ must-see list, White Lies reminded exhausted SXSW attendants what live music is all about.

Once their set ended I rushed back to the hotel to catch UK band Dlugokecki perform in the lounge. Playing emotional pop-rock songs, the band’s set was nothing short of impressive with frontman Ben Dlugokecki’s quirky onstage banter. The rest of the band proved to be just as comical when I interviewed them after their performance. A lot of talk about being President Obama’s favorite band, wanting to be the first band to travel to space, and the difference between American and English audiences, each member was definitely a character. Stay tuned for the full Q&A; soon. 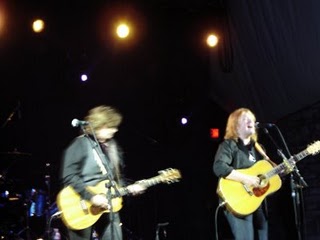 After the interview I headed back to Stubb’s where there was quite a line outside the venue to see 3eb. Indigo Girls were performing by the time I walked inside. Playing a nine-song set including new tracks from their upcoming independent record dropping next week, it was evident much of the crowd were fans as they were singing along word for word. I’ve never seen a band change guitars as much as this two-woman band did, but the crowd didn’t seem to mind. Playing classic American folk, they had the Stubb’s audience’s attention. 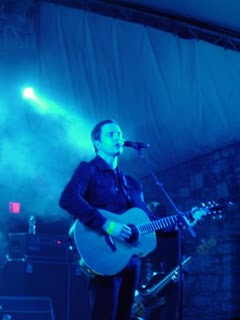 At the airport about to board my plane back to Jersey, but I’ll be sure to fill you in tomorrow on Third Eye Blind’s solid 70-minute show last night as well as the songs they debuted off their upcoming release — due out later this year. Hope you can take the suspense until tomorrow to find out!