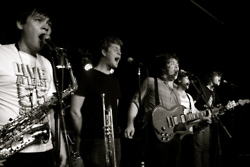 Last night, Great Caesar captivated a packed crowd at Arlene’s Grocery with their energetic and eclectic set. The six-piece Brooklyn based band has an October residency at the venue where they perform each Monday night. Having shared the stage with Deerhoof, The Decemberists, Third Eye Blind and Does it Offend You, Yeah?, Great Caesar continue to showcase their staying power.

Throughout their performance, Great Caesar powered through a slew of songs with powerful choruses, distinct horn parts, ear-grabbing guitar riffs and a heart-pounding drum beat. As a result, they had many in the audience dancing along.

The band kicked off the night with a striking saxophone and trumpet introduction on “6:37E, The Tale of Buck Byron.”  With a bass heavy interlude mid-track and a distinct carnival-esque vibe with piano features, the charismatic act impressed.

Nearly every track had an impeccable musical interlude or unique solo where the band member made the track his own, the Spanish infused “Tango” being no exception. Whether it’s frontman John-Michael Parker’s powerful vocals or the lively horn section, it’s nearly impossible to not tap one’s foot along.

The jazz infused “Mouth Erratic” demonstrated a more mature sound for the band. With a powerful piano introduction, loud horn features throughout, and introspective lyrics, the band struck a chord. “Honestly you must be the change you want to see,” Parker sang passionately.

Their 40-minute set embodied a smorgasbord of genres, no doubt offering something for every music lover to enjoy. For more on the band, visit their Website. 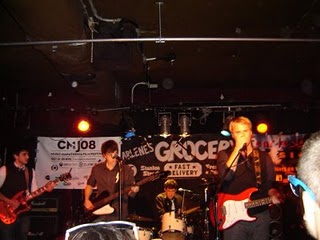 Playing a 7 p.m. set on a Tuesday night may not be a band’s dream gig, but the Canon Logic worked it to their advantage. With sunglasses give-a-ways creatively imprinted with the band’s name on each pair and free downloads of their latest EP, the Canon Logic played to a packed crowd at Arlene’s Grocery that only seemed to get louder as their set progressed.

While their music has been compared to that of the Beach Boys and even the Beatles, the band brought their A-game to their CMJ Showcase and didn’t disappoint, as they had many in attendance dancing along and singing the words to each song. Drummer Mike Mignano likes to describe their music as “a mint-scented breath of fresh air.” While he admits it’s a corny catch phrase, realistically he says “it’s a gritty blend of harmony-driven pop,” which I couldn’t agree more.

Playing a 35-minute set, the Canon Logic’s performance featured a solid mix of songs from their last EP, “The White Balloon,” as well as songs that can be heard on their full-length album due out early next year. Their first CMJ performance, frontman Tim Kiely feels the set was unbelievable. “The fans were great. We had a blast; we always have a blast onstage. We felt pretty tight.” Guitarist Josh Greenfield agrees. “I could only see the first two rows of people. It wasn’t until the very end that I went up front and realized there was a pretty packed house, so that was cool.”

The five-piece band’s energy was apparent onstage as the three guitarists and bass player jumped around the stage throughout their performance, enticing and encouraging the crowd to do the same. Their set included fan favorite “Avenue of Criminals” as well as “I’ve Been Sleeping With Your Best Friend,” a song off their latest EP, the concept clearly chronicled within the title. “Delia” is one song where their ’60s pop flavor is showcased. With strong guitar, keyboard and drum accompaniment the band seemingly takes the audience back in time.

A diverse and devote fanbase, anyone from parents to grandparents to even Greenfield’s high school-aged sister enjoy their performances and frequent shows. “I think we have a wide range of fans. We like to try and bring everybody together,” Greenfield says. “We’re trying to pull from so many different influences. We really like the classic rock stuff and we also like what’s going on now. I think we have a good balance of the two, which allows everyone to really get into the music.”

Surpassing the band’s CMJ expectations, the early Tuesday set time didn’t seem to deter concertgoers. “It’s pretty cool to know that we can get a good group of people out at 7 p.m. on a Tuesday night and they’re acting like its 11 p.m. on a Saturday; dancing, screaming, singing along. It was a good feeling,” says Mignano. 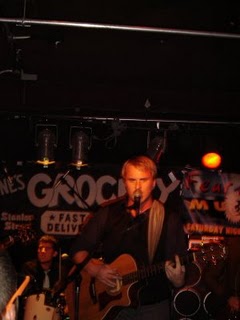 With hundreds of bands performing throughout the week, the Canon Logic continues to set themselves apart. “I think something that we do, which is the toughest aspect of our music, is having five people singing while also being able to handle the rock attitude,” Kiely says. “I don’t see many bands do it. I don’t know if I’ve seen a band do it and pull it off well. We’re really confident in what we’ve got going and I think that’s what separates us. And we’ve got great songs.”

If one thing is certain, a Canon Logic show won’t leave you bored. “You can expect a little bit of everything; some dancing, some singing along. We have a lot of songs that our fans come to shows to see and they’ve been learning the lyrics; they’re really easy to sing along to so they really enjoy getting into the songs and dancing and also head banging and rocking out,” Greenfield says.

Be sure to check out the Canon Logic’s MySpace and Blog for more info about their next record and catch their next show Nov. 8 at Maxwell’s in Hoboken! Check back in few days for more of my interview with the guys of the Canon Logic.

To read this live review, originally posted on the UWire click here.