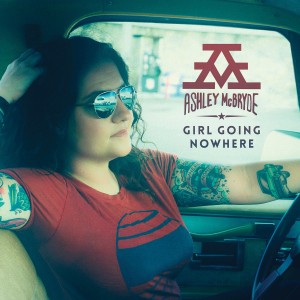 Ashley McBryde will release her major label debut, Girl Going Nowhere, on Friday and it’s an album that begs to be heard. The singer has already been getting rave reviews from Garth Brooks, Eric Church, and Miranda Lambert. Upon hearing the title track to her album, Brooks called McBryde “a songwriter’s dream” while Church invited McBryde on stage and on tour with him, raving, “she’s a whiskey drinking badass.”

I reviewed the album recently for Sounds Like Nashville and it’s a release that I find myself still listening to after turning in my article, which is always a good sign! Opening track “Girl Goin’ Nowhere” has become an anthem for both the singer and country fans, and it’s easy to see why. Inspired by an algebra teacher who told the Arkansas native she should have a backup plan when she shared her dream of moving to Nashville to write songs, “Girl Goin’ Nowhere” is a powerful and heartfelt ballad that has McBryde proving her naysayers wrong.

Throughout McBryde’s Girl Going Nowhere, her honest songwriting strikes a chord and puts the listener in the song on tracks like current single “A Little Dive Bar In Dahlonega” and the unique love song “American Scandal,” where she pleads for someone to “love me like Kennedy and Monroe.”

For more of my review, visit Sounds Like Nashville. Pick up a copy of McBryde’s Girl Going Nowhere, available everywhere on Friday.