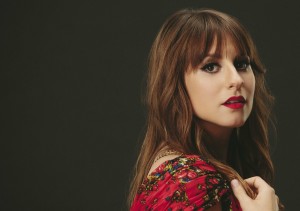 Caitlyn Smith has written hits for numerous artists including Meghan Trainor’s “Like I’m Gonna Lose You,” Cassadee Pope’s “Wasting All These Tears,” Kenny Rogers and Dolly Parton’s “You Can’t Make Old Friends” and Garth Brooks’ “Tacoma,” among others. After years of writing for other acts, Smith released her excellent debut album, Starfire, in January.

I’ve interviewed her several times over the years and Smith’s energy is contagious. Additionally, her star power is evident in the live setting where her voice soars majestically. Take a listen to “Tacoma” below for further proof.

“I’ve been writing in Nashville for probably 12 years,” she told me back in 2015. “I tell people it’s 90% disappointing. A lot of times you’ll write a song and be like, ‘Yay! This a masterpiece.’ And maybe you’ll show it to somebody, and maybe it’ll get put on hold, and then it won’t get cut. Or, maybe it will get cut, but it won’t make the record. Or, maybe it will make the record but it won’t be a single. There’s a lot of disappointment.”

This disappointment can be heard on her standout track, “This Town is Killing Me,” which you can hear below. Despite the struggles songwriting can often bring, Smith has learned to celebrate every small success.

“I remember that first couple years that I moved to town. Anytime something awesome would happen I would go and buy a bottle of champagne and we would celebrate, because it’s really an exciting journey. Celebrate the little things,” she adds.

Smith will be celebrating a new album and headlining tour this week at SXSW. If you’re in Austin, be sure to catch one of her showcases.