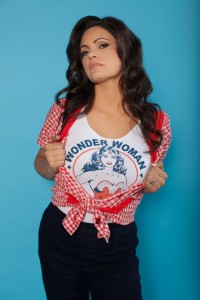 While I’ve already highlighted Ashley Monroe and the Pistol Annies as part of my 31 Days of Women feature, I figured it might be best to showcase each member of the trio individually. Angaleena Presley has remained one of my favorite interviews because of the honesty she shared in our chat nearly four years ago. I sat down with the singer in a cafe in New York City to discuss her debut solo album, American Middle Class, and throughout our lengthy chat there were tears, laughter and many life realizations.

“I got introduced to the world as Holler Annie with these two blondes beside me,” she tells me of her bandmates Miranda Lambert and Ashley Monroe. “I feel like I had to get in a band, make history and kick down a door so I could walk through it as a solo artist…I’m an older artist and I could sit there and be like, ‘Oh this should have happened.’ No. If it didn’t happen like this, you wouldn’t have had this story to write or this song that so many people connect with. I feel like everything happened the way it was supposed to happen for me.”

Many people resonated with her critically acclaimed debut, where on each of the 12 tracks she gives an honest portrayal of her life covering the moments that others may want to forget. On “Drunk,” she details the hurdles she faced during the “most horrific, tumultuous, part of my marriage” and likens writing the song to therapy.

“I just think women are amazing creatures and I’m so glad that I am a woman. I just want to empower women,” she says. “We still have to fight for equality. I think we’re a group of people who have been discriminated against, probably more than any other group on the planet. I just feel like we need to stick together. We need to love our men, but we need to make sure that they don’t take advantage.”

She adds, “Ain’t no man gonna tell me to put a bikini on and wallow around on the hood of a truck. I’m going to sing songs about real things and real problems and real joy and real grief. This is the only thing I know how to do. I can’t fit into the model. I guess I broke the mold and I’m not going away.”

For more of my interview with Angaleena Presley, visit Radio.com.