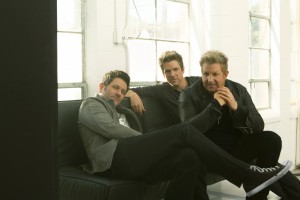 I was recently given a major assignment — to write the inaugural cover story for Sounds Like Nashville on Rascal Flatts. When I first started this blog in 2007, my dream was to write cover stories and to travel with bands for a living and somehow I’ve managed to make that work over the past decade. I’ve previously written a cover story for Country Weekly so I was well aware of the task at hand of interviewing an artist and writing 2,000+ words. But, that doesn’t mean the nerves weren’t there to write it well. I thought I’d share my article with you. Love to know your thoughts! You can find me on Twitter.

Personal loss hit close to home for Rascal Flatts, too. In a candid interview with Sounds Like Nashville, Rascal Flatts’ bassist Jay DeMarcus details a tough personal loss and collaborative loss. Their new single, “Yours If You Want It,” was written by Jonathan Singleton and the late Andrew Dorff. It is also the first song written by and released since Dorff’s unexpected death in December at the age of 40. Upon learning the news, DeMarcus said the life was sucked out of him.

“It’s been such a hard year. I lost my father-in-law right before Thanksgiving. We’ve lost so many wonderful artists in 2016, so it was just like the final straw,” he says quietly of Dorff’s passing over the phone. “Andrew was such a wonderful soul and such a gifted songwriter.”

DeMarcus says Dorff’s death was heartbreaking, but he immediately found comfort in the fact that the band had recorded his song and had already decided it would be their new single.

“I had gotten to talk with Andrew right before his passing about how much he loved our version of the track and loved what we had done with the arrangement. So, at least I knew that he was proud of what we brought to the table, as far as his song goes,” DeMarcus explains. “I was comforted and proud of the fact that, at the very least, we could be a part of, in some small way, ensuring that his legacy continues to live on.”

The song itself has received a welcomed reception from the industry as it was the most-added song to country radio just three days after its release according to Mediabase.

DeMarcus produced “Yours If You Want It” with his bandmates and said there was little to change from the demo. He envisioned a musical hook to the intro and outro of the song in the form of a guitar riff and added those ever catchy “whoa, whoa’s” to the chorus.

“It was such a great demo and Jonathan Singleton is such a great singer and he sang the demo,” DeMarcus notes. “The bones were there. We just put our Flatts stamp on it musically.”

“Yours If You Want It” includes a soaring melody and big chorus the band is known for and continues to push their sound forward. A song about a man who has been beaten up by life, he soon finds himself opening up to a woman explaining how he might be rough around the edges, but what he has left he will give wholeheartedly to her. It’s a triumphant return for Rascal Flatts and a much needed positive anthem to ring in 2017.

For more of my cover story on Rascal Flatts, visit Sounds Like Nashville.