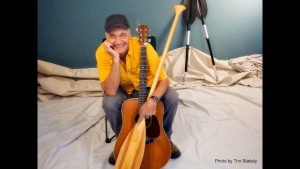 Songwriting Session is a column that goes behind-the-scenes with artists and songwriters. Each Sunday, a new songwriter will share their journey and provide lessons they’ve learned along the way. This week, Jerry Vandiver shares what he has learned as a songwriter.

Seven years into his teaching career in Missouri, Jerry Vandiver visited Nashville during Spring Break and dove into the music scene playing his songs in writers rounds. He had visited Music City many times over the past few years during spring and summer breaks but this trip was different and a fellow teacher at school noticed the change. As Vandiver recalls, while the two were chatting about their vacation there was a lull in the conversation. While he had no immediate plan to move to Nashville, she saw things differently.

“I thought about it and I said, ‘Yeah!’” Vandiver recalls of that fateful day in 1984. “I don’t know if she hadn’t said that if I’d be here today, because it’s a scary thing. I got everything in order, I told my Principal, told my Superintendent I’m not coming back. I came here in the fall and I remember driving from Kansas City to Nashville. I was halfway between Kansas City and St. Louis and I had the trailer behind me. I was like, ‘What the hell am I doing?’”

While he admits he almost turned back, ultimately he knew Nashville was the right decision. And, the thought of turning around and facing some of his biggest supporters after all those going away parties kept him driving. Vandiver cites that conversation with his colleague and his move to Nashville as his first defining moment. The second would come four months after his move when he would play the Bluebird Cafe for the very first time.

“Like everybody else that was really serious about it, I had my blinders on. I was like, ‘Damn the rejection! Full speed ahead.’ I pitched my songs like crazy, but none of them were ready at all,” he admits. “Up until that moment I had been naively calling publishers trying to get my songs heard. I say naively because at that time my songs were not ready. At that time though publishers were a little more receptive and a lot of them — not all of them but a lot of them — would offer critiques and feedback especially if they saw that you were serious.”

There was one publisher in particular called The Reese Company who Vandiver called only to learn that they weren’t taking any material. After his successful performance at the Bluebird, however, another songwriter approached him who had recently played some songs for the company’s owner, Jan Reese. That songwriter, Sandy Ramos, asked if he’d like to co-write sometime and for Vandiver it was a no brainer. He says it was all part of the networking process and after four years of co-writing with Ramos he signed his first single-song contract with The Reese Company. While the song he was signed for never got cut, it was a foot in the door that led to more single-song contracts for the songwriter. Vandiver calls his first single-song contract a “momentous moment” and he and Ramos continued to get better writing together.

One weekend, he was writing a new song while trying to get over a heartbreak. When he and Ramos met later that week she loved what she heard and said that she could make it a hit. Ramos put a new melody on the song and it became their first major label cut together for Gene Watson. The song was called “Don’t Waste It On the Blues” and went to No. 5 on the country charts in 1990 and won Vandiver an ASCAP Award. Vandiver notes that had he not gone to the Bluebird that one Sunday night and met Ramos and had he not had that heartbreak, the song would have never come together.

“Those are the stories that are all over Nashville. I find them fascinating, from anybody’s perspective,” he adds.

Before the song was put on hold Vandiver thought about giving up his career as a songwriter. At the moment his song was being pitched to Watson’s team, Vandiver was considering returning to school to get his Master’s Degree in Secondary Education and was at a local campus taking a tour. Vandiver says going back to school just didn’t feel right and went to his publisher’s office at Little Big Town Music afterward when he learned he had his first hold with Watson.

“I think that most songwriters can make a little bit of encouragement go a long way and so you get a little encouragement like that, a hold or sign a single-song contract or something, and you go, ‘Okay. I can make this last a few more days,’” he explains.

For more of my interview with Jerry Vandiver, visit Sounds Like Nashville.