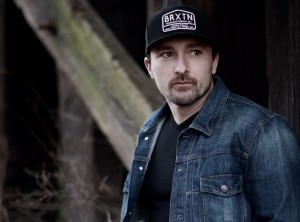 Songwriting Session is a column that goes behind-the-scenes with artists and songwriters. Each Sunday, a new songwriter will share their journey and provide lessons they’ve learned along the way. This week, Erik Dylan shares what he has learned as a songwriter.

Guitars were always present in Erik Dylan’s home as a young boy. The Kansas native vividly remembers listening to his father’s record collection which included artists like Jerry Jeff Walker, Waylon Jennings, Lynyrd Skynyrd, James Taylor and Guy Clark. Once he was older, he recalls his hour-long bus rides to and from school with the radio dialed in on mainstream contemporary country.

“That’s where the musical journey started for me,” Dylan shares over coffee at East Nashville’s Sip Cafe. “I’ve always loved music but I moved to Tennessee to go to MTSU for recording and production technology.”

While attending Middle Tennessee State University, Dylan got the songwriting bug and attempted to transfer into the songwriting program unsuccessfully. As he recalls, the professor of the program told him he wasn’t qualified to be a songwriter because he didn’t know enough music theory. Though this news sidelined him for a while, it wasn’t before long that he picked back up his guitar and began to write songs more seriously.

In 2011, Dylan hit a wall. Miserable at his job, he realized he wasn’t happy doing anything but music so he began playing open mic nights around Nashville every chance he got. As he recalls, he played close to 200 shows that year.

“I’ve always had a philosophy that you must be present to win with whatever you do and I thought at least being off of the couch and playing in front of people would give me a chance to find out how to get plugged in,” Dylan reasons. “I really didn’t know anybody in the music industry and wasn’t related to anybody in the music industry so I just kept doing that. One night I was playing at Belcourt Taps in the Village and luckily a guy named Kip Moore walked by and heard me and got me in touch with his publisher and producer, Brett James. That was the only publisher I ever met with and that’s who I signed with and I’ve been there for the last five years.”

While Dylan is the first to admit there are many highs and “tons of lows” when it comes to life as a songwriter, he says it’s his family who constantly keep him grounded.

“There are days where I wonder if I had the sort of normal 9-to-5 job, would I be making more money? Would I be making the same money? Would I be able to provide better for the family? I think what it comes down to is that I’m a better person when I’m writing songs,” he says. “I think I’m a happier person, I’m more grounded and I think it’ll be cool that my son knows he can do anything he wants to do, to chase a dream.”

Since he signed on as a songwriter with Cornman Music and Warner/Chappell, Dylan has been able to write with some of his heroes including Guy Clark and Steve Earle. He recently performed at the Ryman Auditorium as part of a memorial concert for Clark, citing it as the coolest moment he’s had in Nashville.

Another rewarding moment is having his first major label single with Eric Paslay’s “Angels In This Town.” Written with Paslay and Corey Crowder during a writers retreat in Alabama, “Angels In This Town” was finished quickly. Dylan remembers Crowder initially playing a track he had started while Paslay began strumming his guitar and humming a melody.

“Melody just falls out of Eric. He’s amazing when he sings. He has melodies for days, you never have to worry about a melody,” Dylan shares. “It sounded like he was saying ‘Angels In This Town’ at one point and we all looked at each other and I said, ‘I think that’s our song.’”

For more of my interview with Erik Dylan, visit Sounds Like Nashville.