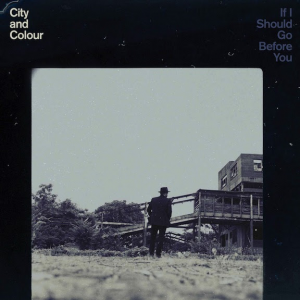 City and Colour, better known as singer-songwriter Dallas Green, released his fifth album today (Oct. 9). If I Should Go Before You is the follow-up to Green’s 2013 album The Hurry and The Harm, and encompasses 11 tracks of atmospheric folk songs that beg to be heard.

The album begins with “Woman,” an eight minute song with nearly one-and-a-half minutes of instrumentals before Green’s soothing voice is heard. Alongside distinct guitar fuzz, he holds the listener’s attention with intrigue.

Meanwhile, on “Mizzy C” the character within the song is struggling with a life out of focus and attempting to change direction in hopes to find what he’s looking for. A tale of perseverance, it’s hard not to root for the man in the song.

The title track “If I Should Go Before You” transports the listener back in time to the ’50s and ’60s when soul music was at the forefront. The slow pace of the song combined with the sweet sentiment of not wanting to leave the earth without his loved one strikes a chord. While many of the songs ease the listener in, there are plenty of upbeat songs with a memorable groove that lighten up the mood, including “Killing Time” and “Wasted Love.”

Where the title track had elements of soul music, “Runaway” and “Friends” embody a slight country feel with pedal steel and slide guitar respectively. And when he sings, “I want to live where the wild wind blows,” it’s hard not to agree.

While each track on the release stands on its own, it is Green’s first single “Lover Come Back,” a beautiful yet heartbreaking ballad, that leaves the greatest mark. It’s hard to believe he wrote the track while on vacation with his wife, but sometimes it is when we take a break from it all that the greatest inspiration strikes.

City and Colour’s new album If I Should Go Before You is available now.