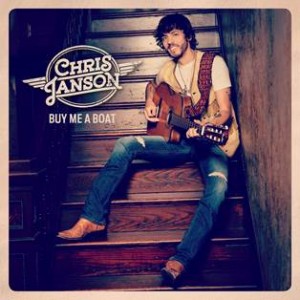 Songwriting Session is a new weekly column that goes behind-the-scenes with artists and songwriters. Each Sunday, a new songwriter will share their journey and provide lessons they’ve learned along the way. This week, Chris Janson shares what he has learned as a songwriter.

Chris Janson has been grinding away in the Nashville music scene for over a decade. One of the most respected artists and songwriters in the business, he saw his biggest success earlier this year when his single “Buy Me a Boat” went to No. 1. After years of getting his songs cut by other artists (Tim McGraw, Justin Moore, Hank Williams Jr., Frankie Ballard, Randy Houser and Joe Nichols to name a few), he released his debut album of the same name on Friday (Oct. 30). I was fortunate to chat with him months ago for CBS while he was promoting his single, which had just hit the Top 20. In our discussion, he shared his journey as a country artist and songwriter.

“I decided I was gonna do [music] professionally when I got to be about 18 or 19,” he tells me, but he’s quick to admit that he has been playing music his entire life as a hobby. “I never wrote songs until I moved to Nashville and got in that scene. I just never thought about that side of things, I just wanted to play music. When I started writing, it was a whole other thing.”

Chris says Nashville is a town that’s built on songs and there is a big community for it. While he’s had his fair share of ups and downs over the years having been dropped from two labels, he says he never considered giving up.

“I’ve had to work real hard at it, but it’s finally paying off,” he says. “I just figured if I had a guitar and harmonica that I can probably just do it on any platform or level, and it just goes to show that persistence pays off.”

Chris adds that it’s important to him that his songs are relatable and that he always writes from a real place. When I ask him if he’s ever afraid to reveal too much of his life in his songs, he admits that’s a question he has never been asked before.

“Good question. I don’t think so. No. The answer would be no.” He pauses for a moment. “This is the beauty of being a songwriter: I can reveal as much as I want to and as little as I want to. So I try to keep a good meter on it, but I’m a pretty open book. What you see is what you get. We live an honest lifestyle and just try to be good people. I think that’s important. As far as my fan base is concerned, it always has been real people in the American working world, and I think they gravitate towards real songs and real stories and dudes that they can relate with that are singing.”

He’s quick to add that being a hard working man and an honest songwriter is very important to him and he won’t be chasing radio hits.

“I don’t ever want to record, write, or cut anything that’s just a hit song, per se. It has to be something that I can identify with myself and something that I can get up and pull my boots on in the morning and say, ‘Yup, that’s me singing it.’ I’m real happy to be the ‘Buy Me a Boat’ guy. Not only is it on the radio, but I really like the song.”

When I share with him a fan’s question on what he would tell a struggling artist he admits that he gets the question a lot.

“First of all if you’re gonna do music for real and take it serious, you gotta move to where the music’s at, where there’s a scene, like Nashville,” he asserts. “If you wanna do country music, you need to go to Nashville.”

He adds: “I definitely encourage people to do it their own way and never fold into what anybody else thinks they should do. That’s the number one thing. Take it from a guy who’s seen it from all walks of life, and I’ve had every up and down you could imagine. ‘Buy Me a Boat,’ that song came out independently. My wife and I did it right out of the house, and just kind of made that happen by the grace of God, and we did it our way. And we’re still doing it that way even with a brand new record label, it’s pretty awesome. So I guess bottom line would be just do it your way and don’t ever budge from it.”

Read my complete interview with Chris Janson on Radio.com. Buy Me a Boat is available now on iTunes.