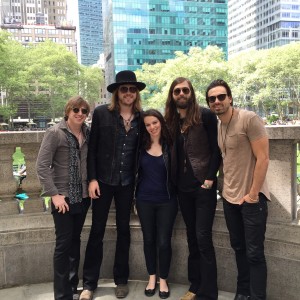 I vividly remember my first time visiting Nashville. It was the summer of 2009 and my two friends, Deana and Wendy, convinced me to join them on a trip to Music City for the annual CMA Music Festival. I must admit, I had little knowledge of country music back then besides Taylor Swift, Rascal Flatts and Keith Urban. Midway through the festival, though, I was sold on country music. So much so, I remember telling one freelance writer I met that I wanted to move to Nashville ASAP. Her advice to me: build your career and reputation in New York first. In Nashville everyone covers country music and it’s much harder to break into the field but in New York, I’d be the big fish in a small pond.

Looking back on a blog post from 2009, that initial spark and desire to move to Nashville is apparent:

Being in Nashville for CMA week really opened up my eyes into the country music realm and I was so glad to be a part of it. Somewhat of a newbie to the genre, what I saw this week were some of the most down-to-earth, appreciative and welcoming people in the business and it’s so refreshing to see the stars so receptive and engaging with their fans. I just may have to make a yearly trip to Nashville from now on!

Little did I know that yearly trip would turn into a desire to pack up all my things and move to Tennessee! When asked how I, a Jersey girl, first got into country music I always tell the story of this first trip to Nashville and my first experience attending a press conference at CMA Fest. Definitely a fish out of water, I had little knowledge of the country community and press conferences. I had never attended a press conference before and I didn’t realize you had to shout at the artist to get your question answered. Darius Rucker was the first artist to come through the room and as all the journalists yelled to get their questions answered I simply sat there with my hand raised. In that moment I felt so out of place and questioned my even being there. The last question was asked and Darius was being ushered off the stage by his publicist. But then he stopped and looked right at me.

“You have been so patient this whole time. What is your question?” he asked, pointing to me. 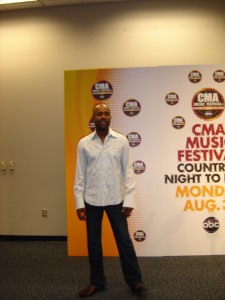 I didn’t even realize he was talking to me so I turned to look behind me but sure enough he was addressing me. In that moment I was sold on country music. Having covered pop music for years, I really don’t think Lady Gaga or Justin Bieber would have even noticed me, let alone asked what my question was as sincerely as Darius did.

Since 2009, I have covered the country genre for Marie Claire, AOL, Rolling Stone, Billboard, Country Weekly and CBS and have gained some of my favorite New York memories thanks to the genre. Meeting Lady Antebellum at a Miranda Lambert concert at Terminal 5, then my first interview with Lady A a week later at City Winery. Kenny Chesney and Zac Brown Band being my first concert review for Rolling Stone. Spending the day with Keith Urban. The list goes on and on.

With all that said, I think it’s safe to say I built up my country music cred in New York and now it’s time for my next adventure — moving to Nashville. I’d be lying if I said I wasn’t nervous. Every morning I wake up at 4 a.m. with a minor freakout. Is this the right decision? Am I going to get work? All I know is in New York and New Jersey! While all my family is up here, I won’t grow as a writer and as a person unless I jump out of my comfort zone every once in a while. So, I am moving out of Brooklyn July 31st. I’ll head down to Nashville mid-September after spending some time with friends and family in New Jersey. It’s a huge leap for me, having grown up and gone to college in New Jersey and not knowing many people in Nashville but it’s something I have to do. I know I’ll always regret it if I don’t.

To celebrate, and say proper goodbyes, I’ll be doing it the only way I know how: by hosting a concert! Next Thursday, my roommate Leah Taylor and I will be putting together a show at Arlene’s Grocery in the Lower East Side from 7-9pm including performances by Hide & Seek, Eugene Tyler Band and Leah Taylor. Come by early for happy hour and stay and enjoy some free live music. The night will be bittersweet for sure, but I have good reason to believe Nashville is the best decision for me career-wise at this moment. In the meantime, I aim to update this blog more often on my adventures, bands to watch and interviews. Stay tuned for another exciting chapter for You Sing, I Write!

4 replies on “You Sing I Write Says Goodbye To NYC”

Annie! Congratulations on taking this professional leap! I remember when I met you at Arielle Hyatt’s place in Park Slope, I was inspired by you writing mission – and the fantastic name of your blog!
I’ve since started blogging myself and am really impressed with what you’ve done! If I can’t say it in person – best of luck in Nashville and thanks for the inspiration! Rock on!

Best of luck to you Annie on your BIG move. I wish you much success.

So happy for you Annie! You will do great, I know it. Leaving somewhere you know and love is SO hard, but broadening your horizons is so rewarding. Knock ’em dead. <3

Best of luck Annie! I know what it’s like moving to a “foreign” location where you don’t know anyone. It took me 3 years to realize I had made the right decision — but I think you will feel it sooner. I think you already feel it.Go with your heart and you will be fine 🙂