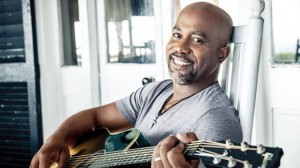 Darius Rucker’s song “Homegrown Honey” went to No. 1 this week and it’s easy to see why. The song is as country as they come. Rucker wrote the song, the first single off his new album Southern Style, with Lady Antebellum’s Charles Kelley and Nathan Chapman. He told me last year that Kelley initially came up with the idea for the song.

“I was playing golf with Charles Kelley one day,” Rucker explained. “Charles is probably my best friend in the business. He said, ‘Man, we’ve been in Nashville seven years and have never written a song.’ I hadn’t really thought about it, but he was right. We had never written a song together. When I got to the session he had this great idea he had started with the opening line, ‘Sitting in a bar in New York City everyone here looking New York pretty.’”

“Homegrown Honey” is the introduction to Rucker’s excellent new album, which he says is the “countriest” album he’s ever released. “We’re going more into the countrier side of music than trying to go the other way,” he says.

Rucker says the success of his 2013 hit “Wagon Wheel” had some influence on the makings of the fun and countrified album Southern Style. While he didn’t sit down and consciously decide to do a song like “Wagon Wheel” again, he said it did open his eyes to the fact that he could do a “real country song” and have a hit with it.

“‘Wagon Wheel’ was the most country thing on country radio that year. It definitely opened our eyes to the fact that I can go make those country records and maybe have a hit or two and make another one,” he admits. “It definitely influenced this record.”

For my complete interview with Darius Rucker, visit Radio.com