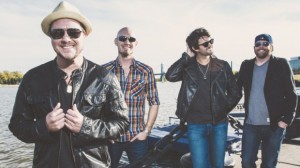 I was fortunate to interview Eli Young Band on their tour bus while I was in Nashville last month. The band that made “Even If It Breaks Your Heart,” one of my all-time favorite songs a huge hit, it was great to meet the group who have been the soundtrack of my struggling freelance days. During our chat, the guys filled me in on their new EP, songwriting and how their wives continue to inspire their music. Read an excerpt below and the full interview on Radio.com.

The Eli Young Band originally had no intention to release any new material this month. But the four members of the Texas-based group were recently in the studio working on music to follow up their 2014 release 10,000 Towns, and their label Republic Nashville immediately loved what they heard.

Now four of those brand-new songs are included on the group’s new EP Turn It On, which dropped on March 10.

“We felt like we were onto something as far as the next step as the Eli Young Band,” frontman Mike Eli tells me, sitting in his tour bus with his bandmates during a stop in Nashville, Tenn. for the 2015 Country Radio Seminar.

“We just recorded these songs in January, so it’s a fast turnaround,” Eli continued. “The label came in and heard what we were doing and really liked it and wanted to release the single and get it out as quick as possible. They really fast-tracked it, faster than anything we’ve ever done.”

While the four Eli Young Band bandmates are all happily married, Eli says they often draw from their past, “Your Place or Mine” being no exception.

“It’s fun to channel the old days in some songs,” Eli says. “We’ve all been in that relationship.”

Eli says that song in particular was “really fun to write, and there are some really cool lyrical moments that we were really happy with as we were writing it. The song draws from the old school music of the Eli Young Band, which is neat to incorporate into the evolution of where we’re going.”

Eli wrote the song with bandmate Jon Jones and songwriters Ross Copperman and Jeremy Stover. Of the track, he says he and Jones each ended up marrying a woman like the one in the song, and Jones agrees.

“My wife and I are married 14 years now,” Jones adds. “We dated through college, and then we took a break. Then there was a point before we got back together that we went through a ‘Your Place Or Mine’ kind of thing, where maybe we were getting back together because it was familiar. Even though it is a really sad song, maybe it does have a happy ending.”