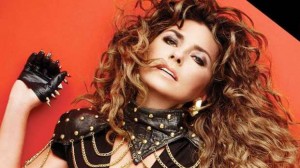 If you were to tell me back in 1999 when I was sitting down with my family watching Shania Twain’s CBS television special (with an appearance from the Backstreet Boys!) that one day I would interview her, I would not believe it. But that’s exactly what happened a few weeks ago.

Earlier this month, I chatted with the country singer over the phone right before she announced the news about her final tour. During our chat, she told me it will be a “dynamic, kick-ass show.” As the title of the tour, Rock This Country, suggests, she promises exactly that.

“It really is a rock meets country show. It’s going to have a lot of punch and edge. I just feel like I want to go out there with a bang,” she adds.

She’s also working on new music and while she wouldn’t divulge too much, I did get a little hint as to the direction she’s going in.

“The songs are going great,” she says enthusiastically. “I’ve been putting them together for a really long time now. They’ve been whirling around in my head, so I’ve got a pile of things, way too much for one album.”

While Twain says she’s in the studio and the “record is on its way,” she explains that it’s difficult to vividly describe and categorize the sound of the new material.

“It’s hard for me to put my finger on it; I don’t know how to explain it,” she confesses. “One of the producers involved, we were talking about how to describe it in words and he said, ‘This is soul. This is soul music.’”

Twain wouldn’t reveal the producer she’s working with, but she did agree with his ‘soulful’ explanation.

“It’s not like my music was ever traditional anyway. I don’t think anybody expects that from me. Nothing that I’m doing is traditional,” she says. “Certainly, as I reflect back on listening to this stuff, it reminds me a lot of the influences that I had growing up. There’s influences from my childhood in the music that I’m writing now.”

The country singer says she hears hints of artists like Emmylou Harris, Gladys Knight, Roy Orbison and Glen Campbell in the music she has been writing more recently.

“It is a more soulful approach to my songwriting then I’ve probably ever allowed myself to have before,” she admits. “It’s fun music, too. I like to stay positive. I’ll make sure that I do some things on there that make you feel good and happy as well. I’m having a lot of fun.”

For more of my interview with Shania Twain, visit Radio.com. And for a flashback to the ’90s, watch Shania perform “From This Moment” with the Backstreet Boys.