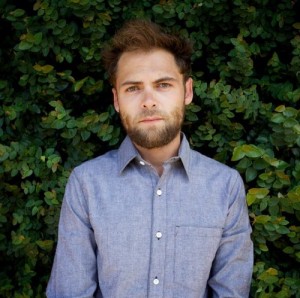 This past weekend I heard a familiar voice on the radio: Mike Rosenberg of UK-based band Passenger. I chatted with the singer-songwriter five years ago about the band’s upcoming album and U.S. tour dates and hadn’t heard much from them since until their current single, “Let Her Go” was being played on the radio.

Passenger’s music is catchy, but the stories within each song are much deeper and even more intriguing. Take “Night Vision Binoculars,” a song about a guy who has a stalker-like crush on his co-worker. “If you listen to the lyrics you realize it has quite a darker side to it. It’s quite tongue-in-cheek,” Mike said.

Below is my interview with Mike from 2008, right before Passenger released their debut EP, Night Vision Binoculars. For more on the band, visit their website and catch them on tour in the U.S. later this summer.

Tell me a little about Passenger. Did you grow up always wanting to be in a band?
Yeah. I’ve always played guitar since I was little really. It was just one of the things that I felt I was good at. Well, one of the only things I felt I was good at. It’s always been a dream really. I started writing songs when I was about 15 and they were really terrible and I hope they got a bit better. I met Andrew, my songwriting partner, about five years ago and we just hit it off and we started writing together and that’s about it. Then we recorded the album and got the band up and running.

I just got a chance to listen to your debut album, Wicked Man’s Rest and it deals a lot with heartbreak and unrequited love. Did you go into the studio having a certain concept for it or was there an overlying theme to the album?
I don’t know really. What I try to do in my songs is just to tell stories, stories from all sorts of different walks of life. Whether it’s an old man in a pub or a guy who can’t get a girl, or a stray dog or whoever it is. There wasn’t really a concept behind the album, it’s just trying to be as honest as possible about everyday situations and they can be really heartbreaking.

Do you have a favorite song on the album?
Oh, I hate them all now [laughs]. Favorite song, I like “For You” it’s the little quiet one. It just takes me back. I was in Mexico when I wrote it. It’s a really lovely time in my life. It takes me back there a little bit.

I wanted to ask you about the title track. There are clips of Allen Ginsberg talking throughout the song, how did you come up with that idea?
That song took a long time to write, and sort of get right. There were a couple of different versions; it’s such a complicated track. The other songs are much more natural really and they seem to just fall out. I don’t know really. I always explain it as, you know when you’re lying in bed and you can’t sleep, and you’ve got billions of things running around in your head and the later it gets the worse you feel? It kind of reminds me of that really. That part of you that grows with anxiety. I think Ginsberg, there’s just something about the tone of his voice and what he is saying it’s so massive, it’s so poetic and it works in the song.

I really liked “Things You’ve Never Done,” especially that one line “The only failure is never to try.” What inspired the song or what were you thinking when you wrote it?
From personal experience I guess. I think we’ve all made decisions in our lives that we regret, and I think most of those regrets comes from not doing things rather than trying something and failing. I think it’s a very simple concept and a very simple line but it seems to really affect people and really ring true of it. There’s something sad about growing old and not fulfilling everything you wanted to do. I think everyone can relate to that.

How would you explain your music to someone who has never heard it before?
That’s a difficult one. To be honest, I usually try and get the storytelling aspect of it across. It gets the hat of people like Neil Young and Bob Dylan, but also with the production and the band side of it, it’s kind of more elements of massive attack and that whole sort of thing. It’s a really difficult question and after five years I still haven’t gotten it figured out. Lots of local harmonies, lyrically-based kind of country-pop music I guess.

What can we expect from your EP being released in the U.S. later this month?
Our EP, the title is Night Vision Binoculars. You can expect a quirky song in “Night Vision Binoculars.” It’s quite tongue-in-cheek. It’s about a guy who falls in love with one of his co-workers and she doesn’t know he exists. He ends up hiding up in a tree outside of her house. The idea behind the song is people listen to it and sort of start singing along and only the third or fourth time of hearing it, if you listen to the lyrics you realize it has quite a darker side to it.

So how many songs are going to be on the EP?
I believe, I’m not actually sure exactly, but I think four. I think there’s an acoustic version of one of our songs and possibly some live ones as well. I think its a little taste of what’s to come really.

What do you feel makes your band different from other bands?
I think the subject matter of our songs is different. A lot of modern day pop music all revolves around the person’s girlfriend or boyfriend or whatever. I’ve tried to broaden that a bit. [Going] back to Bob Dylan and country and folk music when storytelling was a common thing and now it’s not so much. We just try and be slightly different, the production is slightly different and hopefully my voice is different.

What inspires your music? Do you have a certain writing process?
When I’m walking along, I don’t know if it’s the blood flow or whatever, I get a lot of ideas when I’m out and about. I use my mobile phone, which is a picture phone, when I get ideas. It can come at any point. You can go two months without writing a song and I wrote five last week. I don’t understand it at all, but I love the process.