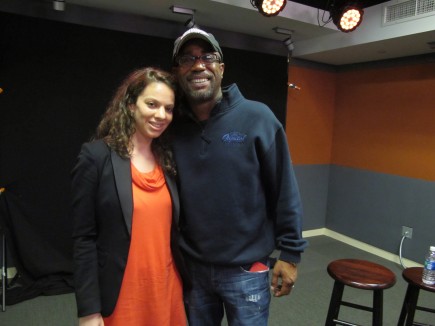 While I’ve been saving my country posts for my relatively new Tumblr blog, I thought it was fitting to come back to You Sing I Write for this post. In fact, if it wasn’t for me starting this blog in the first place I would have never discovered my love for country music. Back in 2009, I visited Nashville for the first time and that experience became one of my top 5 moments of the year. This is what I wrote:

“The community between artist and fan is phenomenal and even the press are extremely welcoming. I remember my first night in the CMA press conference and being extremely nervous because the biggest country stars would be there for interviews. Martina McBride, Rascal Flatts, Brad Paisley! A Jersey girl covering the Nashville music scene, I was definitely a country newbie. I kept raising my hand throughout the night in hopes to squeeze a question in and quickly learned you have to be aggressive and shout out your questions to the artists. Lucky for me, Darius Rucker noticed my continuous unsuccessful attempts and while the PR person was ushering him off the stage he pointed to me and said, “You’ve been so patient this whole time. What’s your question?” I was shocked and humbled.”

That experience forever changed my preconceptions of country music and I fell head over heels for the genre.

Fast forward to 2012. One of the first interviews I conducted for CBS was Darius Rucker. He was opening later that night for Lady Antebellum and came into our studio to chat about his new single at the time “True Believers,” and what we could expect from his forthcoming album of the same name. I was finally able to tell him the story of that night in the press conference and thank him for making me a country fan and he was so appreciative.

Today, he released his third country album and having interviewed him three times over the past year we decided to make a video package from the content he provided in support of his new album. You can watch the complete video below. To learn more about his album and the story behind many of the tracks on True Believers, visit Radio.com.