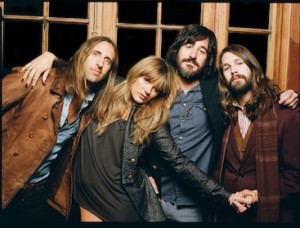 Grace Potter has spent her summer on the road with dudes. On the aptly titled Brothers of the Sun tour with Kenny Chesney, Tim McGraw and Jake Owen, Potter proved she could hold her own as a standout opener. I caught her set earlier this month when covering the show for Billboard and as Potter danced around the stage during her performance, she exuded energy. In fact, at one point she kicked off her heels to run around the stage and it wouldn’t have been a huge shock if she started doing cartwheels.

The band opened their set with the soulful “Nothing But the Water” where Potter was found alone on vocals center stage for nearly two minutes before the rest of the band jumped in. Her high energy set continued with the rocking “You Can’t Stop the Beat” with ear-grabbing percussion, plenty of guitar distortion and Potter’s captivating vocals.

Prefacing “Stars” off her new record, she explained the story behind the song.

“This song I’m particularly attached to and there’s two versions of it on the record,” she said. “That’s because Kenny Chesney  heard the song when I was still working on it and he said, ‘I gotta sing on that song’ so we recorded it with him.”

A slow burning ballad, the piano driven track impressed with Potter’s powerful vocals. While Chesney didn’t make an appearance on the song during her set it was easy to see why he was so taken with the track.

“What’s the point of being the warmup band if we’re not warming you up?” Potter asked the crowd.

And that she did. In fact, watching Potter dance around the stage, wailing her arms in the air it was hard not to do the same as her excitement was contagious. Closing her set with the sultry and jazz fused “Medicine,” Potter even took to the drum kit to pound on the drums before running down the stage’s catwalk and shaking fans hands. With so much energy and a sold-out audience at MetLife Stadium in New Jersey, Grace Potter & the Nocturnals no doubt made many new fans.

As Potter’s opening set impressed it was her striking duet with Kenny Chesney on “You and Tequila” that had the crowd screaming for more. Chesney even prefaced the track saying it was “one of my favorite songs I’ve recorded,” as he welcomed Potter back to the venue: “She always makes the stage so pretty.” Having Chesney as a fan is an impressive endorsement and I have a feeling we’ll be hearing a lot more from Grace Potter & the Nocturnals in the near future.