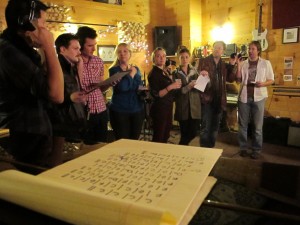 It’s hard to believe that I’ve been writing about music for several years, but have never actually been in a studio while a band was recording. Always a dream of mine, when Benjamin Wagner invited me to join him at Galuminumfoil Studios in Brooklyn I couldn’t say no.

For the past five years, Wagner and friends have been recording A Holiday Benefit, a selection of holiday classics while putting their own spin on the music. An annual benefit concert is held each December where the CD is available for purchase and all the proceeds are donated to 826NYC, a nonprofit organization dedicated to supporting students ages 6-18 with their creative and expository writing skills.

I’ve been covering the benefit shows since their inception in 2007 and each year discover new musicians that I soon become a fan of. So, on a cold Friday in November I headed to Galuminumfoil Studios, not exactly sure what to expect. 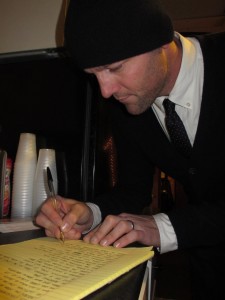 Shortly after 8 p.m. I entered the studio where half a dozen or so artists were hanging out, writing lyrics to sing and trying to decipher the right piano chords to play with the track. That night, the vocals for the group number, “Do They Know It’s Christmas?” were being recorded.

A huge fan of the song, Wagner said “Do They Know It’s Christmas?” is the reason A Holiday Benefit came together.

“I went to Chris [Abad] and said we should get everybody together and do something. It’s because I loved this song when I was a kid,” he recalls. “What if we got all our friends together and did one on our own and made money for a charity?” 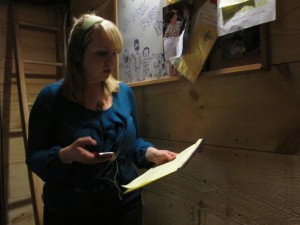 While some of the artists have been friends for years, others met for the first time that night. Her first year singing for A Holiday Benefit, Georgia native Mary Bragg was excited to be part of the project and even wore a pair of Santa Claus socks to get her in the spirit.

“We’re not a band that has been rehearsing together. Sometimes things happen and you have to redo it,” she said of the recording experience. 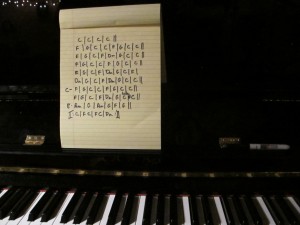 As Wagner finished writing the lyrics to the song, singer-songwriter Misty Boyce took to the piano to record the last of the instrumentals. Meanwhile, studio engineer and producer Jeff Berner gave her further instructions for the track.

“My idea is to have some ethereal piano in the background. This is going to be a long fade and we’ll dub more parts in,” Berner said. 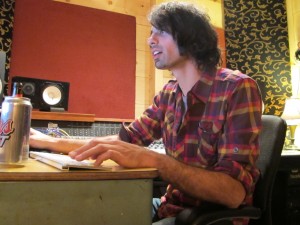 Once the piano part was perfected, the solos were assigned and each singer took turns at the mic for a few takes.

Bragg was up first and impressed with spot-on vocals. Though the first take sounded like a keeper, everyone in the room had her sing it two more times for their own enjoyment.

Initially excited to sing Bono’s part in the song, Boyce was nervous during her recording session.

“When I get nervous I get cold,” she told Wagner who urged her to do some jumping jacks. “I’m Bono. Fuck, it’s too much pressure man!”

“I’ve been singing this song for 25 years, you can sing it for 25 minutes,” Wagner replied to which Boyce started dancing around the studio. 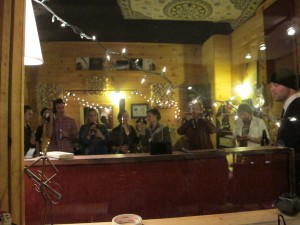 Soon after, Bryan Dunn, Sarah Nisch, Dan Scott and Philip Drennen of Astoria Boulevard, Chris Abad and Wagner recorded their solo parts before the entire crew got together for the group chorus.

“This is gonna be interesting. I’m glad we’re saving this for last,” Berner joked.

As the group huddled together and shared headphones and mics, it was hard not to get into the holiday spirit. With their perfected harmonies and all around talent, A Holiday Benefit, Vol V. will no doubt be a success.

After a few takes, the group was satisfied with their performance and went into the studio to listen to the song on the speakers. Nodding along and at points, mouthing the words they seemed satisfied at the final product.

“And that’s how it’s done!” Bragg said, summing up the night.

Be sure to catch the artists perform December 14 at Rockwood Music Hall II. For a complete lineup and to order your tickets click here.