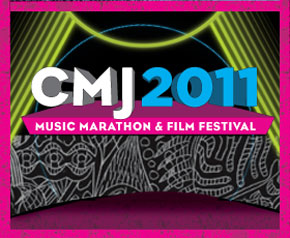 Over 900 bands performed throughout New York this past week during the annual CMJ Music Marathon. For five days and five nights, music lovers scoured the City to discover up-and-coming acts, and in some cases found themselves new fans. Here are five acts from the festival to keep on your radar.

Friday afternoon I attended the “Beyond Blogfamous” panel where Bruce Warren, Assistant Station Manager/Programmer of WXPN, raved about Alabama Shakes. He said something along the lines of them being the one band that has a shot of bringing rock & roll back. Naturally, I was intrigued. Turns out they were playing later that night at Bowery Ballroom so I made sure to catch their show.

From the moment Brittany Howard belted her first lyric on set opener “Hold On,” she captivated every ear in the venue. Her voice brings to mind Amy Winehouse with the power of Aretha Franklin. A distinct ’60s Motown vibe is heard throughout many of their tracks. On “You Ain’t Alone” she growls, “If you’re gonna cry, cry with me” while the rest of the band adds to the mix. With bombastic guitar riffs, soulful keyboard interludes and a heart pounding drumbeat, Alabama Shakes prove they’re a force to reckon with. As one festival-goer told me during the show, “You feel like you’re watching something special.” I couldn’t agree more.

I featured Deep River as a Band of the Week last year and their set Saturday night at Rockwood Music Hall reminded me just why. The Virgina based trio exude confidence, often joking with the audience and enticing fan participation while onstage. With alternated singing between Rachel Beauregard and Bryan Dawley along with Luke Brindley on guitar, the country-fused band transported the New York City venue to the South. With foot stomping rhythms and mandolin accompaniment throughout much of their set, the band impressed. Newer songs like the soulful “Settin’ the House on Fire,” co-written in Nashville, showcase the band’s staying power.

As each song ended, the audience hollered for more. From Cranstoun’s crisp singing style to soaring musical accompaniment from his band and the help of three powerful gospel singers, his audience was the most engaged of any CMJ showcase I attended. After the set, I praised their performance and Cranstoun said, “November 19th will be much better.” The day of his record release for The Last Drop of Color, he’ll be performing Nov. 19 at Mercury Lounge.

Having opened for Coldplay at 60,000 capacity venues, the South Africa-based band stopped in New York during CMJ for a performance at Highline Ballroom. Though the room was a bit smaller than the crowds they’re used to, The Parlotones didn’t alter their set in the slightest. Between frontman Kahn Morbee’s charismatic and theatrical stage presence, arena friendly choruses, and killer guitar riffs, the band won over their American audience. Songs like set opener “Life Design” satisfied with haunting vocals while The Parlotones’ energetic encore included a fast-paced Elvis Presley cover of “Burning Love.” While the band has sold more records than Coldplay, Oasis and The Killers combined in South Africa, it’s only a matter of time until the rest of the world catches on.

You know you really like a band when you attend more than one of their showcases during CMJ. Brooklyn-based We Are Augustines wowed a sold-out crowd at Bowery Ballroom Wednesday night. With gritty guitar, soaring horn interludes & frontman Billy McCarthy’s emotive, wavering vocals, the band had a similar effect at each of their remaining festival performances.

The band took the stage shortly before 1 a.m. Wednesday night and had the audience screaming along until the close of their set an hour later. “I hope this is a celebration for you because it is for us. It’s been a little while since we’ve headlined here so we appreciate it,” McCarthy said. The majority of their show included songs off debut release, Rise Ye Sunkin Ships along with a solid cover of Joe Strummer’s “Road to Rock ‘n’ Roll.” Songs like the energetic “Chapel Song” hypnotized while the poignant “Book of James” struck a chord. For more on the band, read my interview here.