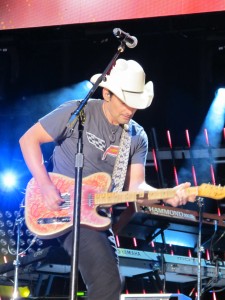 Brad Paisley is one of Carrie Underwood’s best friends, so it was only a matter of time before the two collaborated on a song. However, the process took longer than both expected. Carrie recently explained just how ‘Remind Me’ came about and why Brad’s ‘Waitin’ on a Woman’ may not be about the person you think.

In Nashville for the Billboard Country Music Summit, Carrie revealed that doing a song together had been on the radar of the two superstars for a while, but she doesn’t like to force things. “We’re not gonna sing ‘Yankee Doodle Dandy’ just because we both know it and we need to sing together. We both wanted to do this.”

Once Brad pushed back the release date of his album, ‘This Is Country Music,’ the two were finally able to set up a time to meet.