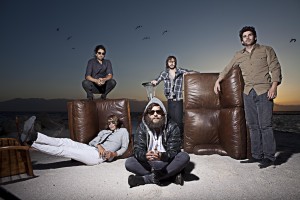 Called by one critic “a more talented version of Kings of Leon,” Vanaprasta is just that. With soaring guitar interludes, solid percussion and relentless vocals, Vanaprasta impresses. Formed in Los Angeles in 2008, the five-piece band has been making a name for themselves with their “blood-stirring” live show and well received debut EP, Forming the Shapes.

Songs like “Minnesota” impress with soaring vocals and haunting musical crescendos mid-song  while “Skinny State” continues to pick up the pace with quick guitar licks and equally fast percussion features.

Title track, “Healthy Geometry” showcases the band’s softer side at the song’s start. However, as the track continues, the tempo quickens with a screaming, almost rap-like interlude from Wilkin. By far the most memorable number, “Healthy Geometry” sets Vanaprasta apart from the crowd.

In addition to original music featured on their MySpace page, the band recorded an impressive cover of LCD Soundsystem’s “All My Friends.” With tracks so diverse, you can expect to hear much more from Vanaprasta in the upcoming months. Be sure to visit them on MySpace.

1 reply on “Band of the Week: Vanaprasta”