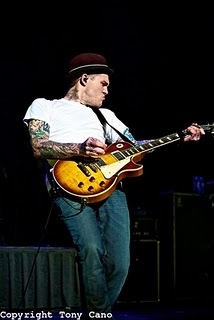 New Jersey favorites the Gaslight Anthem packed Radio City Music Hall Thursday night for a marathon set of nearly two hours. While the band showcased songs from their entire catalogue, their gratitude to fans was apparent as frontman Brian Fallon continually thanked fans when he could find the words.

Shortly after 9 p.m. Radio City went dark while “Somewhere Over the Rainbow” played through the speakers. The band took the stage to screaming fans and powered through “High Lonesome,” “Boxer,” “We Came to Dance” and “The Diamond Church Street Choir,” an impressive variety of songs from their three full length albums before Fallon addressed the crowd for the first time.

“Radio City. We started playing in basements. Elvis might even show up. I know we’re in New York, but I imagine New Jersey is represented in the crowd tonight.”

For the complete review, visit BumperShine.