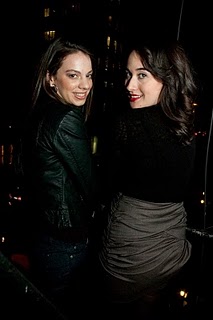 I was talking with my friend and colleague, Monica (photo above), about the blog this past week and she said she wants to read more about my adventures. In her words, “I find you more interesting than some of the bands out there.” She suggested I start a column with a behind-the-scenes look at a day in my life. I figured I’d give it a whirl this week since the past month has been surreal. Love to know your thoughts and feedback!

A few weeks ago, I received an email from Hanson’s publiscist about setting up an interview. Since I’ve been writing for a few publications, I wasn’t sure if he found me through another outlet or my blog, so I asked him. Turns out he found my blog and reached out to me directly.

The band my friends had huge crushes on in middle school.

My seventh grade self was in disbelief. When I got word I’d be interviewing heartthrob Taylor Hanson, I had to message one of my best friends from middle school to tell her the news.

The interview went really well and Taylor proved to be extremely considerate and detailed with every answer. I was a little worried when he took nearly six minutes to answer my first question, but luckily I was able to ask everything I needed within our nearly half hour chat. This totally made up for my awkward days in middle school.

And guess what, he says he isn’t tired of performing “MmmBop” after all these years. I find that hard to believe. Check out their latest video below for single “Thinking ‘Bout Somethin'” based on film, The Blues Brothers. Stay tuned for my complete interview in the upcoming weeks.

Last Friday, Monica, Wendy and I headed into Brooklyn to celebrate friend and fellow music journalist Emily’s birthday. After an artery clogging meal at Chip Shop, frozen hot chocolate to die for, an impromptu stop at Southpaw and a few packed vintage stores later, we headed back to the car. Coming out of a restaurant with takeout bags in their hands were two guys that HAD to be in a band. After getting a closer look I realized they were from Gaslight Anthem, Jersey’s very own up-and-coming rock stars, and a group I’ve been trying to interview for nearly two years now.

I wish I could say I didn’t act like a stalker and casually continued to the car, but I HAD to say hi! I approached the guys and asked rather eagerly if they were Gaslight Anthem to which they said yes and we chatted for a few minutes. 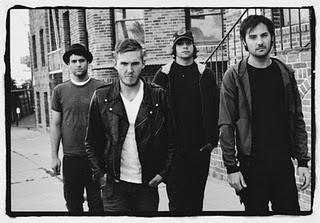 Monica and I told lead singer Brian Fallon that we used to work with drummer Benny Horowitz in college at Rutgers’ newspaper, The Daily Targum. He told us about moving to Brooklyn, missing Jersey and their current tour schedule. Meanwhile, I tried to maintain my composure without sounding like a crazy fan because they’re all I listen to at full blast while driving around Jersey. Apparently, I’m the first person that’s recognized them on the street, although bassist Alex Levine told me they’ve been mistaken for Depeche Mode.

As we were saying our goodbyes, they told me to reach out to their publicist about setting up an interview. Hopefully, this time around it’ll actually happen. I’ll keep you posted!

Last weekend was jam-packed with Brooklyn festivities, my friend Sarah’s bridal shower and bachelorette party and an interview with Colbie Caillat. I’ve interviewed Colbie on the phone before, so I was excited to chat in person. I’ve been listening to her for the past three years, ever since my cousin from California tuned me onto her music, so I was especially looking forward to finally meet her.

Colbie turned out to be so incredibly sweet and such a great interview. She told me of her stage fright and how she still gets nervous before every performance. This put me at ease, because I also get nervous before each interview. Up until the moment I sit down and ask my first question I’m freaking out inside, regardless the artist or if it’s a phoner or in-person interview. It’s always a relief to know I’m not the only one!

Monday, I relived my childhood when catching Backstreet Boys perform a free show in New York. Wendy and I showed up a little after 8 a.m. and right away got a wave from Brian Littrell (Gasp! He was my childhood crush). If you knew me back in middle and high school, I was a BSB fanatic. Posters covering every inch of my room, concert tickets to each tour, and knowing every obscure bit of trivia about each member in the band. Heck, I was seriously convinced I would marry a Backstreet Boy one day. (I’m not even joking…)

Crazy, I know. But, this music obsession is what led me to who I am today. So, I guess I have BSB to thank for becoming a music journalist. 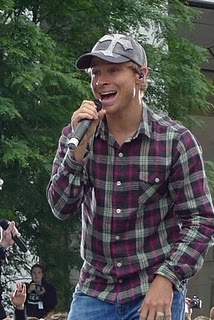 After their on-camera interview and performance, Brian came to the back of the stage and told Wendy, “See, I told you I’d come say hi,” before shaking both our hands. (!!!!!)

While we’re no longer 13-years-old and convinced we’ll date a BSB, it was still a gesture I’ll remember in the years to come. Let’s just hope I interview them sometime too.

If I learned anything this past week it’s that sometimes life isn’t always what you’ve imagined it would be, it’s even better. If you wait long enough and chase your dreams (no matter how crazy people think you are), at the end of the day, it will be worth every second. KTBSPA.

4 replies on “You Sing I Write Adventures: A Day In the Life with Annie Reuter”

I agree with Monica. Keep the adventure stories coming!

How funny – my cousin turned me on to Colbie as well, and I was also a huge BSB fan, with Brian as my fave! I don't think I ever thought I'd marry any of them though, heehee. I did manage to get a second row ticket years ago when they performed in Iowa City. That was pretty cool. We went to the venue with a number amount in mind that we were not going to go over when trying to get a scalped ticket, and it turned out at the last minute they opened up a bunch of floor seats for the regular price! We totally lucked out!

Anyway, I say keep sprinkling in these behind-the-scenes posts!

and that is what they call living the life

Thanks guys! So happy you like the new column. Heather, can't believe your cousin turned you onto Colbie and your favorite was Brian 😉