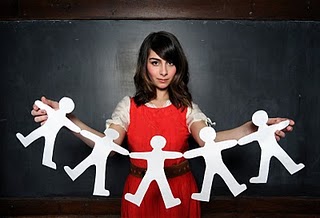 Last week, I introduced you to Kelli Pyle, the artist who inspired our Girls Who Rock benefit concert for She’s the First.We’re thrilled to welcome Jersey girl Cara Salimando to the lineup! Having recently toured with Ingrid Michaelson and Mat Kearney and performed at Bamboozle, things are going well for the 18-year-old singer-songwriter. Salimando is set to play at Lilith Fair later this summer as well as Girls Who Rock June 10th!

While she’s been compared to Regina Spektor and Ingrid Michaelson, Salimando’s descriptive songwriting and distinct vocals make her stand out. Read below to find out more on Cara and be sure to give her a listen on MySpace.

What first sparked your decision to pursue a career in music?
I’ve always loved music. I can’t exactly pinpoint one exact moment or instance. I think taking voice and piano lessons from a young age helped me realize this was the only thing I could be doing with my life. I had two very inspirational teachers; Stacy Smith of Red Bank, NJ was my first voice teacher and Gregg Zubowics of Woodbridge, NJ was my fourth piano teacher. They both encouraged me to write my own songs and learn how to write on an instrument. I never thought I would even make it as far as I have so quickly. Without their guidance and assistance, I have no idea what I’d be doing right now.

What inspires you?
I’m mostly inspired by relationships between people. My friends, my family, myself. Romantic or platonic. I write a lot about people, and from other peoples point of view. I guess you could say that I’m inspired by the people in my life.

What’s your songwriting process?
It’s always different. But I can’t lie. I come up with my best ideas in the shower. I pretty much wrote “Cigarette Smoke” in the shower. Maybe it’s because I have so much time to think in there. I have no idea. I just came up with a pretty cool riff the other day that I’m excited to develop. Honestly, I think I just need a piano and an empty house to write. Lyrics, for me, come first. Usually the vocal melody comes with the lyrics simultaneously. I mostly do chord changes and piano very last. But like I said, it’s always different.

What are some of the obstacles you’ve faced?
In high school I had a music teacher that wasn’t very supportive of my “budding career.” He was very discouraging to work with. I wasn’t a “favorite” so very little attention was paid to me. I liked popular music, which isn’t a part of the curriculum in a high school music program, only classical and jazz were [so] I dropped the music program. But, it turned out to be a good thing. I think if he had given me his approval and given me opportunities he gave other kids, I wouldn’t be where I am right now. I think it’s a bad thing when too many people believe in you. You get a big head. I think a little adversity is great fuel for your own fire. Believing in yourself is what really counts.

What was your favorite class in school, besides music?
English, hands down. I love to write and read. I read so many books. I’m a nerd.

What’s the next big thing happening in your career?
I’ll be playing at the Lilith Fair festival this July in Indianapolis! I’m really excited. Sarah McLachlan is a huge influence of mine, so it’s a completely mindblowing opportunity to be involved in something she’s so passionate about.

What’s your favorite ‘girl power’ song?
I don’t know if this counts as a girl power song, but probably “Sleep to Dream” by Fiona Apple. It’s empowering in it’s own way.

Why did you decide to get involved with She’s The First?
Education is important. I’m lucky. I grew up in a small town, in a pretty house, and went to great schools ever since Pre K. I’m aware that other girls aren’t so lucky. No one should be denied a good education for any reason. The fact that there are so many girls that don’t have the advantages I did growing up is upsetting, because something CAN be done about it, unlike so many other issues that are out of our hands. I’d love to be a part of anything that helps other girls get the education they need to be successful, well spoken adults and professionals.