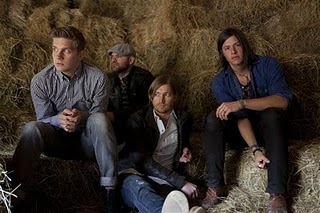 One of the most talked about bands over the past few months, NEEDTOBREATHE has been gaining attention with their impressive release, The Outsiders, and energetic live show. Even Taylor Swift is a fan, recently tweeting “Trying to find a @needtobreathe concert close to one of our tour dates– dying to see their show!”

Set to play Bonnaroo next month, the South Carolina natives don’t show any signs of slowing down as their tour continues throughout the fall and winter. I chatted with drummer Joe Stillwell on the phone before their hometown performance in Clemson, South Carolina, just seven miles from where the band grew up. Stillwell filled me in on the origin of the band, the story behind some of their songs and what has kept the band motivated over the past 11 years.

“If I wasn’t playing music then there would be something missing from my life,” Stillwell said.

Read my exclusive interview below. For more on NEEDTOBREATHE, visit their Web site and watch the band perform their award-winning hit “Lay ‘Em Down” below.

Congratulations on your 3 wins at the Dove Awards! Did you imagine the album would have this much success?
It’s pretty cool. The rewarding thing is that this is based mostly off of people talking about the record. We’ve seen so much growth and people coming out to live shows recently. Ever since the fall tour, right when the record came out and up until now, it’s exploded as far as the number of people that are coming out to shows. It’s not based off of one big single on radio. It really feels like these are people who have heard the record and were told by their friends, “You need to listen to this record.” For us, that’s really rewarding because it says that people really connect with the art that we make and not just hear one song on the radio.

I wanted to ask you about “Lay ‘Em Down.” What was the inspiration behind it?
We were working on a different song in the studio when we were getting demos together for this record and it just wasn’t going well. We were hitting a wall working on that other song so we took a bit of a break. Bear and Bo [Rinehart] went into another room and started messing around with guitar parts. I think they had the lyrics written within 10-15 minutes. It was a really quick, organic songwriting process. But then of course, because we’re such studio rats, we spent two days getting the stomps and claps perfect. It was really fun doing that song. It’s got a lot of soul to it.

One of my favorite tracks is “Stones Under Rushing Water” with Sara Watkins of Nickel Creek. How did that collaboration come about?
After we had written “Stones” we knew, after running through it a few times, it needed to be a duet. It needed to have a female voice on there. We had a few different ideas as to who we might want to do it. When we went to record it, turns out [producer] Jim Scott actually worked with Sara Watkins and was good friends with her. He gave her a call she was all about it. She came out to the studio in LA for one day. She came in and laid down some vocals. We almost had her play the fiddle too. She was absolutely amazing, just a beautiful, beautiful voice and she’s such a sweet person. It’s definitely one of my favorite tracks on the album.

You all grew up in South Carolina and there really wasn’t much of a music scene there. What sparked the decision to start a band?
Bear and I roomed together when we went to college at Furman University in Greenville, South Carolina. We just started playing music in our dorm room and around campus and got the band together. Because there aren’t a whole lot of places to play close, you just start traveling and play anywhere that will have you. College weekends consisted of driving several hours to play a show somewhere in the southeast instead of hanging out and fooling around on campus with our friends on the weekends. Instead, we were driving around in borrowed cars and playing rock shows. And it’s paid off now.

NEEDTOBREATHE has been together the past 11 years. What has kept you motivated?
I think it’s the fact that we know this is absolutely what we’re supposed to be doing. For us, people ask us the question of what you’d be doing if you weren’t in a band and we’re just like, “I haven’t even thought about that.” I would be a completely different person. If I wasn’t playing music then there would be something missing from my life. It’s that kind of knowledge that we feel like we’re supposed to be doing it and the drive to make it happen.

I heard Taylor Swift is a fan and even tweeted that she wants to catch a show. Has she made it out yet?
Not yet. We’re still waiting to get that call to tell us that we to need to add extra security because Taylor’s coming to the show. It’s pretty cool especially since she has like three million followers on Twitter. A ton of new people got turned onto us from that so it’s pretty awesome. We saw Twitter comments after she did that from her fans saying, “I love this band now” and then we also saw some Twitter comments from our fans saying, “Well I guess it’s cool to like Taylor Swift now.”

You’ll be playing Bonnaroo in June. Is that the first big festival for you?
It’s not our first festival. It’s our first time at Bonnaroo. We’ve done festivals before, but this is definitely the biggest we’ve done so far. We’re pretty excited about it.

Do you prepare any differently for a festival?
A little bit. The show that we do in clubs, it’s a lot easier to get quiet and be a little more subtle with the show. With a festival, there are so many people and its outdoors. Everything is so huge you have to play the bigger songs and you can’t really do the more intimate type of things that we do in a club setting. It becomes a little bit more of a high energy show. Our normal show is already high energy, but you’ve gotta do bigger movements and bigger songs in order to get people to see you all the way in the back.

How would you describe your music to someone who has never heard it before?
When somebody asks me how I describe the sound of NEEDTOBREATHE I typically say its good rock & roll. Rootsy rock & roll with a lot of soul to it. That’s the only real genre I can put our music in. It’s just rock & roll. You can’t pigeon hole it much more specific than that because it does cover such a broad range. I always say rock & roll and let them make their own decisions.

What are you thinking about while onstage performing?
I typically focus on what I’m doing whenever we play. I’m behind the drum kit and at the back of the stage [so] I can’t see as much of the crowd as the guys up front can. I just try and interact with the guys as much as I can and get into my own little world. They play off the crowd a bit more because they’re right there and can get that energy from them.
I react more to what the other guys are doing rather than what the crowd is doing. You can still feel the energy from the audience back there, but I’ve closed myself off behind the drum set. I tend to zone out every now and then.

Is there a song that means more to you now than when first written?
I think for me, a song that I’ve always loved is “Don’t Leave Just Yet” off of Daylight. I’m trying to convince everybody that we need to bring that one back and start playing it live again because it has such a great groove to it. I think “Haley” is a really good song. It stands the test of time.

For more on NEEDTOBREATHE visit their Web site or purchase a copy of their album.

[…] Watch NEEDTOBREATHE perform “Valley of Tomorrow” acoustic below and for my interview with them, click here. […]