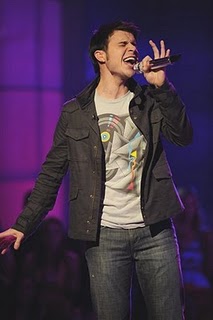 Kris Allen stole the hearts of many this past season on American Idol and, as a result, was crowned winner. Since then, he released his self-titled album and stormed the charts with his first single, a cover of The Script’s “Live Like We’re Dying,” while his performances of “No Boundaries” and “Heartless” garnered similar success.

Before he took the stage at Madison Square Garden for Z100’s Jingle Ball in December, Allen filled the press in on his busy year. Read below to find out more on the singer-songwriter, his album, and his run-ins with the cast of Boy Meets World.

What’s your opinion on the Adam Lambert controversy at the American Music Awards?
The first question, huh? Nice. Get it out quick, that’s good. Okay. I didn’t know what you were talking about. I didn’t know if something new happened. You never know. I thought it was Adam being Adam. I’m going to get a shirt that says, “That’s Adam.” It’s who he is. Obviously, he couldn’t do that stuff on Idol so you’re getting to see the real Adam now.

I saw you tweeted about meeting Ben Savage. Was that the highlight of your year?
That was great! I met Topanga earlier this year and I met Corey in the airport last night. We stayed in the same hotel.

What made you release the B-side to The Script’s song as your first single?
What made me? I thought the song was good and obviously the Script wrote the song. I felt like it would be a good transition from the Idol stuff to what’s going on now.

Do you think it’s a good or bad thing that you and the other American Idol contestants released your albums the same day?
I think that’s usually how it goes. I didn’t see it as a bad thing. I think we obviously share fans. If people want mine, Adam and Allison’s CD they’re going to get it.

What do you do to combat writer’s block?
I usually go take a walk or hang out outside. Usually I like to go outside if I’m having inspiration problems.

I didn't realize The Script wrote that track. Now that I read that, it makes sense, though. It does sound a bit like them. Personally, I think The Script are fantastic songwriters. Such an underrated band. Epic needs to release "We Cry" as a single in the US. It could be huge!