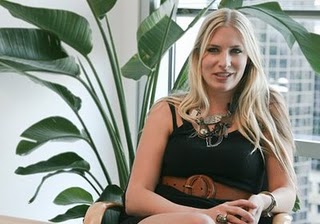 Music is in Holly Williams‘ blood. Writing her first song at the age of eight is just one indication. Being the granddaughter of the legendary Hank Williams Sr. and daughter of Hank Williams Jr. doesn’t hurt either.

I chatted with Holly the week before the release of her latest album, Here With Me. A solid compilation of moving ballads and timeless tales, Holly lives up to her family name. Read below as she fills me in on her songwriting process, her up-and-coming stylish boutique and the Nashville music scene.

How do you feel your new album is different from your past work?
This new album is definitely different in terms of just having the experience of touring forever, more studio experience and knowing what I wanted out of the sound. The songwriting didn’t change that much. There are a few more songs that are a little rootsier, more country sounding. This time around I wanted to have at least two songs on the record that are totally raw. There is one song called, “Three Days In Bed” which is just myself and guitar, it’s a live performance and then there is a Neil Young song called “Birds” which is just me and a piano. And then there is the big band stuff. I really wanted to have a mixture of everything production-wise. It’s just songs over the last four years, what I’ve been going through.

Your song “Mama” is very emotional. Are you ever scared to put too much of yourself into a song because it is like writing a diary?
Yeah, it is definitely like a diary. We all get along great in my family, and all the issues were discussed. But, there are always songs that are very strange to play. Whether it’s an ex-boyfriend that you wrote about who hears it, or a friend, or a family member, there just are always situations that feel sticky when you are playing songs. I can play them in front of thousands of people, but if there are the right two or three people there, that’s when it can get really awkward. But that’s what I love. My favorite artists were the ones that were really raw and sang what they wanted to sing without caring. I try not to let that fear of people hearing things change it.

You started writing at the age of eight in a notebook. Do you remember the first song you ever wrote?
Yeah. I was actually looking at the notebook this morning because I was staying at my mom’s house last night. The first song was called “Who Am I” and I really wanted a publishing deal when I was a little girl. I remember calling companies. I was very ambitious and tried to get my own stuff going. It was during the years of the Tiffany and Debbie Gibson reign and it was something I wanted them to cut. But, it was very introspective for an eight-year-old. I had a really normal childhood even though my dad was Hank Williams Jr. I lived in the suburbs with my mom, so church and school and field trips. I don’t know where these songs were coming from, but they were all deeper and darker than most eight-year-olds would write. It’s similar to some subject matters today.

Your father and grandfather are legends. Did you feel pressure growing up and following in their footsteps?
Well, I never did growing up because it was never discussed around the house. No one ever said to me and my sister, “You’re all going to be musicians” or “Do you like writing?” Really, my dad never pressured me. He just said, “Whatever you want to do.” I was interested in design at the time and didn’t start playing guitar until I was 17. I was doing part-time modeling and I liked interior design. There were a million different things that I was interested in.

Since I’m ask the question so much it now makes me think, “Should I be feeling more?” But, there’s a healthy amount of pressure enough to where it makes me want to work my hardest and write the best songs I can write. Never do I feel I have to be as successful as them because that’s kind of impossible. My dad has had over 50 number one’s and over 70 albums and Hank Sr. released over 200 songs by the time he was my age. These days, it’s an album every year-and-a-half and the cycles are slower. So, it’s enough pressure to have a healthy fan base and following, but it doesn’t stress me out too bad.

I think that if you’re a local, you have some of the country music scene, but most locals don’t necessarily go to Broadway on their nights off to listen to music because you can have it any night and we kind of take it for granted, for the country music. There’s all kinds. There’s the Christian music record labels are here and a lot of indie bands have gotten deals, The Features and De Novo Dahl. It’s such a variety and that’s what I love about living here. Everyone from Richard Marx to Sheryl Crow now has a place here, Michael McDonald, all the country artists, so it’s a variation.

I love your necklace! Tell me about your boutique.
Well, it’s called H. Audrey and it opened a year-and-a-half ago. There just wasn’t much shopping in Nashville, there never really has been. There’s the Macy’s in the lower end and we don’t have a Nordstrom, Neiman Marcus, Saks, Barneys or anything like that and I’m a huge Barneys fan. I have everything from Alexander Mcqueen to Rag & Bone, Alexander Wang, Rick Owens, APC, just off center designers that I loved and felt like weren’t getting a presence here. A lot of stylists come in all the time. The musicians, I think feel like they finally have a place to shop.

I try to carry a lot of unique pieces. This necklace is from there and these rings, I just try to carry statement pieces, whether it’s one great jacket or one great shoe. It’s my passion and music will always be my number one, but it’s great to have this as a side project and to get off the road and have a few days of going to market, folding jeans and doing inventory. I mean it sounds boring, but it’s nice to have it on the side. I do all the buying, just seeing what’s coming new for spring and what’s coming new for the next fall and finding new lines. The website is www.haudrey.com. You can’t buy off it yet, but you can see what’s there and call and order.

You’re involved in so many things. How do you prioritize and multi-task and still have a life?
Well, it’s interesting because when the shop opened I was off the road and making the album. I’m at the store every day, all day if I’m
not busy with music. These days, now especially since my album is coming out, it’s a couple hours of press each day and then I’ll go to the store. It’s definitely juggling now. I have a great store manager, so it can run while I’m not there, but I like to be there just because the racks look better.

When you’re the owner, I guess you think of it as your baby. And I have great employees, and they treat it great, but it’s hard. It’s getting harder now that I’m getting busier. I have to do a lot of the buying online, which I don’t like. I like to feel the fabrics and see the designers and I love to style people. Eventually, when I settle down and have kids and take a couple years off, that’s going to be what I’m doing. It’s definitely getting harder, but I’m still committed to both.

What’s your songwriting process like?
I don’t carry a notebook. It’s all in my head. Songs always come to me at the same time, the lyric and melody. A lot of people sit down with their guitar and play chords and find a melody or they’ll write lyrics and then come back to the instrument. But, for me it’s always been at once. The single “Mama,” I was driving down the road. A lot of times it comes when I’m driving or on a plane. It’s always at once and very quickly. Usually a 10-15 minute period and it kind of gets out real quick.

If it’s a song where it doesn’t come quickly and I have to work on it, then it’s usually not very good and not one that I want to keep. It’s few and far between. I used to write a lot more in my younger days and I didn’t get that much I liked. Sometimes I’ll go two months without writing a song and then two will come to me in one day and it’ll just all come out. So I never know. They’re like little droplets from God that I never know when they’re going to hit.

When recording, how do you decide what goes on the album? What happens to all the songs that don’t make the cut?
Well, I think the different thing about my career is that most people go in with their A&R; guy who helps them find songs and the label says, “Cut this many and then we’ll choose.” But I had an amazing amount of creative freedom here and the label’s great about it. So I actually knew what we were going to cut and I just walked in and said, “Okay, today we’re going to do these two and these three.” And for this time, especially, we did not overcut. I think we overcut two songs and then took them off. I like to have things planned out before and go through [the songs] a couple weeks before the studio starts and see what are the favorites. Since I write most everything, I don’t search as much for outside songs and have more of a grasp on what I want to record for sure. It’s always about a two-week process before the studio starts to really nail it down.

What’s going through your head when you’re onstage performing?
I’ve been performing for a really long time. I started when I was 20 and I’ve probably done 1500 shows. So, I’ve finally gotten to the point where it’s really just living in the moment and I’m so comfortable with the songs. Sometimes I can be in the middle of a song and think, “Oh my God did I let the dogs out?” I’m so comfortable with certain songs at this point that I really am just able to live in the moment and enjoy singing it. It took a few years to get to that point. I used to stare at my feet the whole time. I wouldn’t look at the crowd. I didn’t want to talk about the song, I was really nervous. Now, I’m usually really in the song and really in the middle of it and just telling the story and connecting with it. I’m always thinking about, “I wonder who’s out there that can relate to this” or “I hope someone is familiar with this story and has lived through it.” It’s always about people being able to relate to it.

For more on Holly and her new album, be sure to visit her on MySpace and for all you fashionistas out there, check out her store H.Audrey.