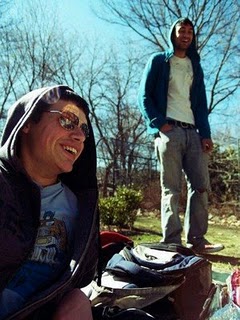 I met up with Boston-based Hip-Hop group The Throwbacks last month in Bryant Park. Rappers Ryan Evans and Aviator filled me in on their music, performing in New York and overcoming people’s rap stereotypes. Playing multiple shows around NYC, The Throwbacks were well received at many gigs and their pure dedication and DIY approach to music is nothing short of inspiring.

Throughout their stay in New York, Ryan and Aviator performed around Union Square while passing out their music. Definitely unique, the band’s CD could be found within paper lunch bags with hand drawn artwork and song titles written on the inside. Extremely grassroots, if their dedication and hard work is any testament to their music, The Throwbacks will be taking the music scene by storm in no time.

Their DIY CD mix includes 10 songs (five of theirs and five of fellow Base Trip Records artist, Rapper Steph), showcasing catchy beats with even tighter hooks as their talent is undeniable. Each lyric is intelligently thought out and although distributed via paper bag route, the listener would have never guessed it as their five tracks are mixed well, sounding like a professional release.

On “Targets,” The Throwbacks rap, “Know that it’s so much more than the rap/The Throwbacks are a new genre/We stack cheese like lasagna.” And, I have to agree. The Throwbacks have, in fact, created a new genre. Taking beats from previous Hip-Hop, indie, and rock tracks, if there was a genre called intelligent rap, they would be the leaders of the pack. Whether it’s name dropping pop culture icons or referencing current politics, one thing is certain, The Throwbacks tell it like it is.

“We got 40 plus tracks you can burn through/Plus a whole CD you can peruse … When push comes to shove/We make the shit that you love/So throw your hands up/Turn your speakers up/And let us be,” The Throwbacks rap on “Targets.”

Stand-out tracks like “American Phenomenon” are descriptive and leave an impression for it’s out-of-the-box lyrics. Each time the listener hears the track, there is a new line that jumps out. Take a listen and see for yourselves. Watch The Throwbacks below rapping “American Phenomenon.”

For more on The Throwbacks, be sure to visit them on MySpace and stay tuned for my full interview with Ryan and Aviator.

2 replies on “Band of the Week: The Throwbacks”

hell yeah! 🙂 THIS IS AN AMERICAN PHENOMENON!

Thanks for introducing me to them! They're so great 🙂